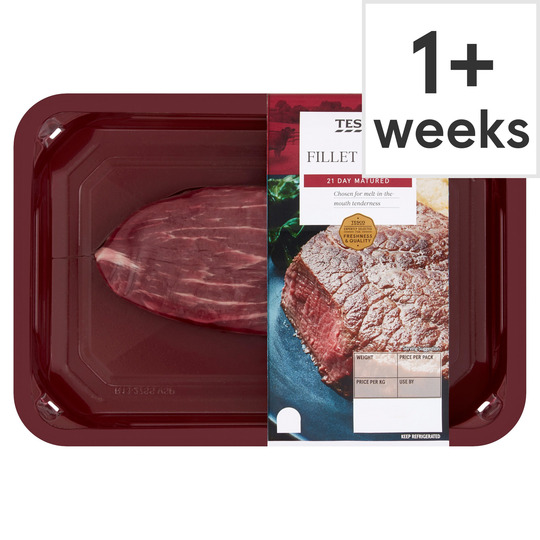 Suitable for home freezing. Ideally freeze as soon as possible after purchase but always by 'use by' date shown. Defrost thoroughly for a minimum of 12 hours in the fridge. Follow the preparation guidelines above. Not suitable for cooking from frozen. Once defrosted use on the same day and do not refreeze. Keep refrigerated. Once opened, consume within 1 days and by 'use by' date shown.

Shallow Fry
Instructions: Remove the steak from the fridge and remove packaging 20 minutes before cooking. Season and oil the steak. Heat a dry frying pan until very hot and cook steak for 1 minute each side, reduce to medium heat and cook for following times:
Rare: 2-4 minutes each side
Medium: 3-6 minutes each side
Well done: 7-8 minutes each side
Remove from pan and rest on warm plate for 5 minutes.
Tip
Drop a knob of butter into the frying pan with your steak and bath in butter whilst cooking.
Important
Not suitable for microwave cooking. Not suitable for cooking from frozen. If cooked rare there is a small risk that harmful bacteria may be present. Tesco recommends that all meat products are cooked thoroughly.

I bought 2 of these for a meal on NYE & my husband & I agreed that they were one of the most delicious & succulent fillet steaks we had ever enjoyed - wonderful value for money.

Perfect in every way! Fell apart in my mouth! Yumm

Perfect in every way! Fell apart in my mouth! Yummm!

I look forward to a steak once a week, however last week my steak was inedible, gristle and fat throughout. This is fillet steak (not cheap) Very disappointed but I will give Tesco the benefit of the doubt, maybe it was a one off? If not I will be looking elsewhere.

disappointing for a piece of fillet

I expected a piece of lean beef, instead the meat i received half was solid fat, but this was unseen until the meat was taken from its packaging

The last one I ordered was horrible!. Never a fill

The last one I ordered was horrible!. Never a fillet Steak. It was full of gristle I was so dissapointed. I had to bin it.

The quality used to be good but have bought it on

The quality used to be good but have bought it on four separate occasions recently and every time the quality has been really poor..ruined a special meal and been a total waste of money.

The quality is terrible - bad butchery

The quality is terrible - bad butchery. Looks ok in pack but the underside hides all sort of odd bits of gristle sinew and untrimmed steak. At least 40g of inedible bits trimmed off - leaving only 125g of edible steak. 3 different packs have been the same. Complained to customer service and got refund for 1st 2 packs but the next pack was the same.

Have to agree this last puchase of fillet steak wa

Have to agree this last puchase of fillet steak was a real dissapointment lots of gristle and unevenly cut which a good butcher would never do.

Normally would rate higher but last packs one fill

Normally would rate higher but last packs one fillet was riddled with thick sinewy fat!