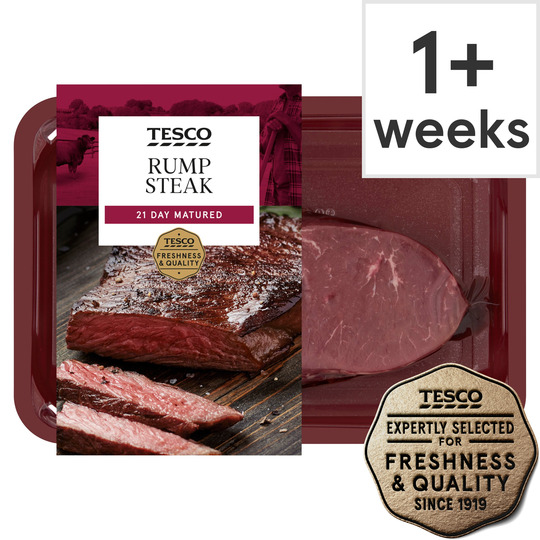 Suitable for home freezing. Ideally freeze as soon as possible after purchase but always by 'use by' date shown. Defrost thoroughly for a minimum of 12 hours in the fridge. Once defrosted use on the same day and do not refreeze. Not suitable for cooking from frozen. Follow the preparation guidelines above. Keep refrigerated. Once opened, consume within 1 days and by 'use by' date shown.

Cooked precisely according to the instructions for rare to medium - this was tough, gristly and had no flavour at all. I cut it up and gave it to my dog (who was over the moon!) I won’t buy this rubbish again.

Too thick to cook - so had to try to cut it in half and wasn’t tender at all .I won’t be buying this cut of steak again. Back to usual sirloin which is always good .

Calling these awful would be a status elevation

If Tesco has a Quality Control Dept they're clearly getting a wage for doing nothing .This is/was the worst piece of gristle I have ever bought anywhere ,time someone had a word .

I always give Tesco the benefit of the doubt when

I always give Tesco the benefit of the doubt when I’m buying steak as it looks nice and I do love Tesco products, yet after carefully cooking a majority of the time is always tough. No more chances Tesco just had a rump steak tonight and my dog ate more than I did due to about 70% of it being grissel. Extremely disappointed !

who are these people who complain that the beef is

who are these people who complain that the beef is Irish? It comes from Northern Ireland (Britain does not buy meat from the Republic) and, guess what? Northern Ireland is a province of Britain and its beef is therefore British. The quality of the beef itself is, like any other meat, variable. It depends on the animal it comes from and the way it is butchered (literally in some cases!). If in doubt, give it a bash with a meat tenderiser.

The dog ended up with more than I did, had vowed before not to buy any more of this but I did, 3/4s of mine was gristle. My wife's had some enough to be sent back if we were in a restaurant

I took great care with cooking this steak, it was as tough as shoe leather! Will not be buying again!

Although beef looked really lean, it was extremely tough and spoiled what should have been, an enjoyable meal, for my husband and i

Dreadful. I bought two as I usually do. One was brown slimy and oxidised, the second looked great but was tough as rubber. I have always persevered with Tesco and the steaks but now I just can't trust the quality, sadly as is fast becoming the norm for most fresh fish, meat and vegetables.

A Steak of Two Halves