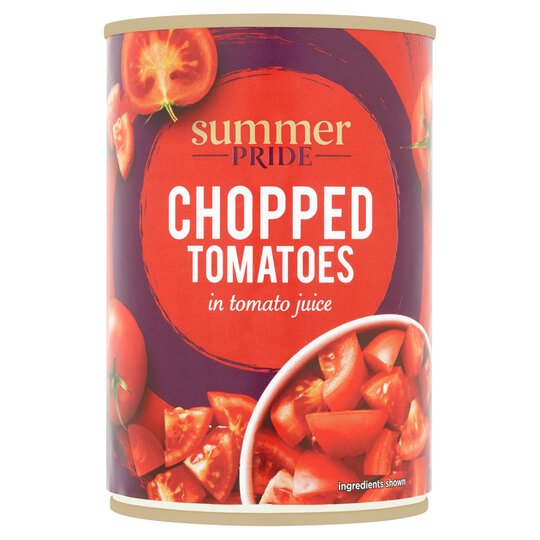 Once open, store in a bowl, refrigerate and use within 2 days.Best before end: see end of can.

Usually get Napolina but these were substituted. OK if nothing else available and you really need tinned tomatoes for a soup/stew etc BUT be warned, the results will be worse than expected. The tomatoes were unripe and in very large chunks; lots of ‘stalky” bits were included (which didn’t cook down), as were many skins, which are absent in other brands. Significantly cheaper than premium brands, you get what you pay for

its ok but not keen on this product, very watery.

its ok but not keen on this product, very watery.

Contents are more water than tomatoes!

Avoid, watery and no flavour

These were a substitution for us and we were so disappointed. Full of water and no flavour. Avoid.

Not good quality - made a couple of bologneses over a period of a few weeks and we were wondering why there appeared to be tiny bits of hard scratchy stuff in it. Tonight I made a cottage pie and thought I'd look a bit closer - I literally fished out 6 bits of the tops/cores of the tomatoes in a few seconds! I wouldn't be surprised if the whole tin was just cores. I won't be buying them again. The Tesco ones are cheaper and better!

I think they were just as good as any of your other tinned tomatoes.

Watery flavour with a hint of tomato

Really poor for a bolognese sauce. Watery and lacking flavour.

the most awful tomatoes ever! acidic and watery!!

I use tomatoes an awful lot for cooking with, unfo

I use tomatoes an awful lot for cooking with, unfortunately I found this brand very watery, so I'm having to use two tins instead of one. I know 'you get what you pay for' but I have used other cheaper brands of tinned tomatoes that have had a much thicker juice