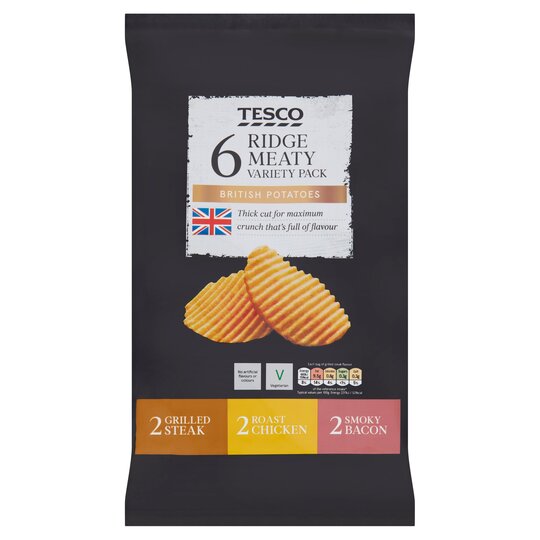 Absolutely awful...like eating oil...where's the flavour...oh yeah it's on one or two crisps...hunt the favouring. Only had these because tesco meaty crisps were sold out. Big improvement needed Tesco. Thank you

Too strong a flavour and the bacon ones are parti

Too strong a flavour and the bacon ones are partic gross

Great crisps but the flavours are not good.

If Tesco could sort the flavour out with these crisps they would be amazing, but while the actual crisps are great the flavours are not. The crisps are thick and really crunchy and the roast chicken flavour is awesome, a bit salty with a intense chicken taste. The other two flavours are a let-down though. The grilled steak flavour is overpoweringly strong and the smoky bacon flavour just tastes of really strong artificial chemical bacon flavour. If Tesco sold these in just the chicken flavour I would buy them non stop, but after buying these twice I wont get them again due to the steak and bacon flavours.

lovely and crisp and tasty

lovely and crisp and tasty

Delicious, thick, crunchy. Just as good as the ex

Delicious, thick, crunchy. Just as good as the expensive branded crisps. Will definitely buy these regularly.

These crisps are the best, thick, crunchy and nice

These crisps are the best, thick, crunchy and nice strong flavours. So good.