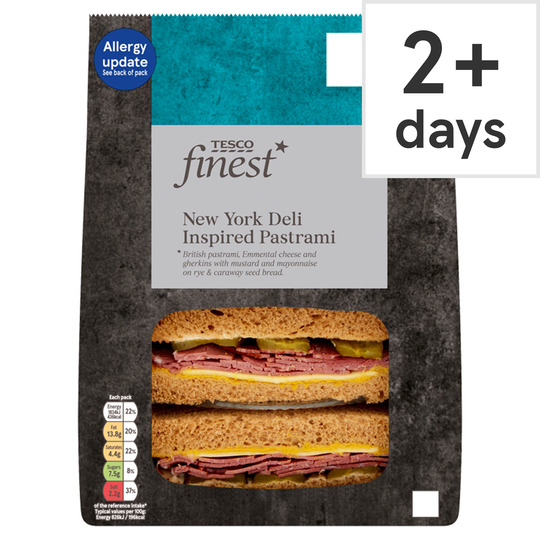 Made using beef from the U.K.

Not to my taste

Received as a substitute which was fine as I meant to try anyway. Unlike another said, my pastrami was tender and plenty. However I am not that keen on gherkin, a bit but this had a lot. Mustard same, Ok with a bit but this sandwich tasted so much of mustard.......more than anything. Hence I would not buy again. Just not for my taste. However, if you like gherkins and mustard, you may like this, nothing wrong with it except that.

Not as gorgeous as the Hog roast one and, not being an American , I don't know how NY Delhi it is , but I enjoyed it alot.

Extremely Bland. Has a nice crunch thou from the G

Extremely Bland. Has a nice crunch thou from the Gurkin

Flippin 'eck. Not very good reviews, which made us want to try them for ourselves. Perfectly tasty and plrnty of everything. Wasn't over keen on the bread but nevertheless we enjoyed them.

The taste of disappointment.

Perfect sandwich if you like the taste of disappointment. I picked one of these bad boys up from the store in Barrow to eat on my drive home. I was already on a downer having to go to Barrow (if you’ve never been, don’t bother) so I thought this would cheer me up. Anyway, 1 mile into my 70 mile drive I thought I’d open it. I was nearly caught out with the slices of green evil that are gerkins but my senses were on point and I was able to remove them before I sunk my teeth into them. Phew. Once removed I started to consume the sandwich with eager excitement. BANG- the taste hit me like a half rotten haddock. The taste was utterly vile. So much so I had to pull over and throw the remaining sandwich away. I did think of feeding it to the wildlife but I’m an animal lover. 69miles still left to drive and all I had was a bottle of water mixed with the salt of my tears as I sobbed. Thanks New York Deli for ruining my day.

The Tesco Finest New York Deli Pastrami Sandwich is anything but fine. The sandwich generally lacked flavour; the pastrami, although bountiful, provided none of the smokiness or seasoning that I would expect; the gherkin added some crunch, but had no tanginess; the spicy kick one expects from mustard was non-existent; the bread had no texture; and I did not even realise there was emmental cheese until I looked again at the packaging. A rubbish sandwich for the price. I would not recommend buying. As a final note, I signed up to Tesco online just to write this review to display my dismay at the product.

I wish I was dead

Today I thought instead of getting a £3 meal deal I'd treat myself to one of the "finest" sandwiches. I love pastrami so what could go wrong? I won't beat around the bush, it was absolutely gross. The pastrami was as chewy as old flip flops and had me feeling sick as I tried to down it as fast as possible to avoid too much contact to my tongue. I had 1/4 of this regret between bread before binning it.