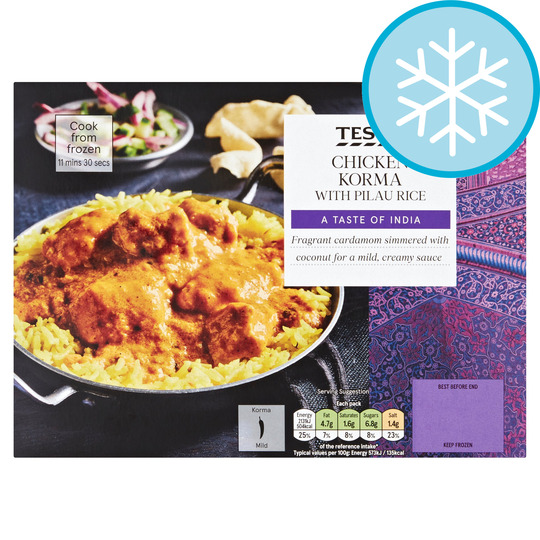 Instructions: Oven: 200°C/180°C/Gas 6 45 mins Place on a baking tray in the centre of a pre-heated oven for 30 minutes. Carefully peel back film lid, add 2 tablespoons of water to rice and gently stir the product. Re-cover and heat for a further 15 minutes. Leave to stand for 1 minute after heating. Stir well before serving.

Rice much too highly flavoured

Contained a fairly generous 8 chunks of chicken, texture OK. The Korma sauce had a harsh taste, but two large dollops of plain yoghurt fixed that. However, no way of fixing the over-flavoured rice, which killed the taste of the Korma sauce, so I cooked some plain long-grain rice to go with the chicken instead. That's easy enough to do, but it meant waiting for it to cook, which rather defeats the point of buying a ready-meal. I would not buy this brand of chicken korma again.

Considering this has less than 5g of fat for the w

Considering this has less than 5g of fat for the whole lot it is amazing, taste wise it can't compete with the ones that have about 30g of fat but this is in a different league for health

Awful. The rice tasted of cardboard. The sauce has some flavour but just curried, unidentifiable as korma. The sauce is on the thin side. Chicken was random, some okay and some very chewy once you found it.

Very good quality, enjoyed. Will go well with a pakora or onion bhaji for those who like mild tastes.

I frequently buy this as it makes a quick tasty lunch.Just as nice as the Tikka and Butter chicken options, but would like it if they make Jalfrezi and Madras as well.

ok nothing terribly exciting about it

ok nothing terribly exciting about it

Avoid, it's not worth a quid.

Awful! I know it's cheap but it's not THAT cheap. Four pieces of chicken in a very watery sauce that tastes nothing like Korma. Rice is dry even after adding water as instructed. But a tin of curry and some microwave rice, it would be much more nutritious. Disappointing for Tesco.

YUK! The chicken was tasteless, the sauce looked awful and tasted worse. Did not want to give it one star.