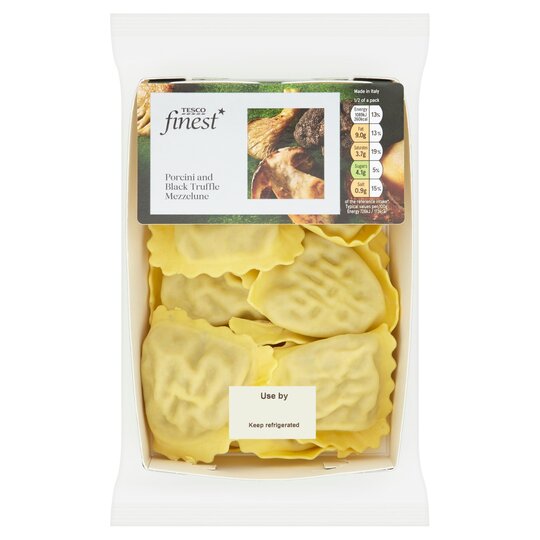 Suitable for home freezing. Ideally freeze as soon as possible after purchase but always by 'use by' date shown. Not suitable for cooking from frozen. Once defrosted use on the same day and do not refreeze. Follow the preparation guidelines above. Defrost thoroughly for a minimum of 12 hours in the fridge. Keep refrigerated. Once opened, consume within 2 days and by 'use by' date shown.

Hob
Instructions: Remove all packaging.
3 mins. Bring a large pan of water to the boil. Do not separate pasta prior cooking, it will separate in water. Add the pasta and simmer. Drain and serve immediately.
Important
Check food is piping hot throughout before serving.

Scrape out all the filling and it's fine

Absolutely rank. The filing is insanely strong and not really edible. I scraped it all out and left it. But it smelt so strong I had to put it in the bin... the outdoor bin. I loved eating truffles in Florence last year, but this dish is really not for human consumption. More than anything I can't believe this has survived the strict Tesco Express selection process that gives me only two fresh pasta options. Who approved this madness?

Followed the instructions to a T and made sure I w

Followed the instructions to a T and made sure I was extra careful with the pasta as I know that filled pasta shapes can easily fall apart and the filling can spill out - despite me being careful half of the parcels still burst and filled with water becoming a sloppy mess. The parcels that were still filled weren't much better as the filling tasted awful. Will not be buying again.

Having already tried this prior to looking at the reviews, I was somewhat surprised at the low rating posted by some, firstly, it tastes exactly as one would expect, a little stronger in flavour which was a pleasant surprise, secondly, it’s obvious that some may have overcooked the product, the packet suggest 3 mins but I only cooked it for around 2 minutes tops, the longer you cook pasta, the less taste it will have, fresh pasta should be slightly al dente, as soon as the pasta starts to swell, it’s cooked, any more and you will lose flavour and likely burst the parcels (as the packet suggests, do not try to separate prior to putting the contents in hot water), it has a lovely flavour and is one of the better filled pasta products on the market, use a good extra virgin olive oil (cold pressed) and either fresh Parmesan or a little grated vintage cheddar (works well). Goes wonderfully well with Garlic Ciabatta and a glass of Prosecco !

Referring to previous reviews: perhaps educate yourself first with the aromas of truffle so that you can appreciate the product with the respect it deserves. Remember the cooking instructions are only a guideline and ferocious boiling will impair flavour and calls for explosions! Serve with light butter, fresh lemon, rocket and Parmesan shavings.

Terrible. The smell is awful. They stink. Don't buy them! I vomited after eating them.

Forewarned by another review I kept the handling & sauce as light as possible and had no problems like dissolving or exploding upon boiling; though I'd keep to no more than a juiced beet, tomato & butter dressing rather than any heavy sauce which could mask their delicate flavour. I served mine over a warm, green veg salad including a little fresh fennel.

Horrific. An affront to fungi and truffles...

Literally one of the most disgusting things I have ever eaten. As usual no matter how carefully you handle and cook, at least half the pasta bursts and you get sloppy water filled shapes. Although to be honest these ones were better than the actually filling which has a texture like sawdust mixed with water, and a taste like sawdust with a splash of mushroom soup. I wouldn’t feed this to my dog, and she enjoys eating badger excrement. Vile. Revolting. An affront to fungi and truffles the world over. Would have given no stars if I could.