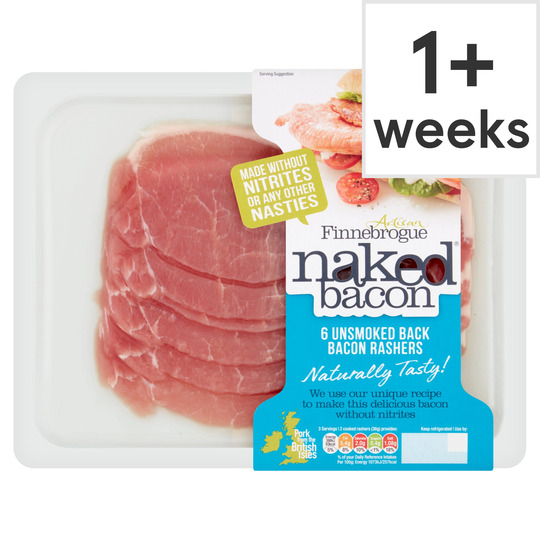 of the reference intake*
Typical values per 100g: Energy 1073kJ

For use by date see front of packKeep refrigerated 0-5ºC Suitable for freezing Freeze by use by date shown and use within one month. Defrost thoroughly in a fridge before cooking and use immediately. Do not re-freeze.

Grill
Instructions: Always Cook Naked Bacon...
Never Cook Bacon Naked!
Med/High Grill 8 mins
Preheat your Grill to a Medium to High heat, and while waiting take your Naked Bacon from the fridge, remove from all packaging and rest a while. We love focussing on food and not the washing up so line the grill with foil and arrange the bacon onto the foil ensuring the rashers aren't snuggled too close ~ grill for 4 minutes each side until nice and crispy, taking time to savour those lovely aromas. Check product is cooked & piping hot throughout. Always wash hands, all surfaces and utensils after handling raw meat. Do not reheat.

Made in the UK using prime British or ROI pork

I have bought this bacon several times but the ras

I have bought this bacon several times but the rashers in the last packet were far too thin and fell apart as others have said. Will try again in the future and hope that this feedback gets passed on.

Very disappointed with this product. The rashers were so thin that they couldn't be separated without tearing. It was cut more like prosciutto than bacon.

I love this Bacon it's free from nitrates and that's a bonus. The taste is better than other brands and it makes a lovely English Breakfast or Sandwich. Their Sausages and Ham are also lovely but Tesco doesn't stock them Which is short sighted of them as they are a more healthy option.

Tasty, not full of water, how I remember bacon used to be, I don't recognise the bad reviews, they don't match what I've been buying every week for a month.

Since being diagnosed with Multiple Myeloma I real

Since being diagnosed with Multiple Myeloma I really looked closely at my diet and actually avoided bacon completely and meat a lot. However, when I saw this bacon which is nitrite free and now not on chemotherapy thought I would try it for a treat, having not eaten bacon for a couple of years now. It was great to see no nasty white stuff coming out of the bacon when being cooked and also that it is not really fatty, as I need to also avoid this due to my cholesterol. Just one complaint the bacon is too thin, as only one piece remained whole - the rest fell apart! Please ensure all the slices are of a sensible thickness, rather than being paper thin.

Lovely bacon always look for it and the sausages F

Lovely bacon always look for it and the sausages Finne-brogue also sells Naked ham not as big a fan of the ham as I am of the bacon and sausage but you eat it without worrying I never any other brand now.

It's very good, and free of all sorts of nasties,

It's very good, and free of all sorts of nasties, but the description no longer even says outdoor reared / bred - what's up? (free range would be even better).

Looks the part but a lot of water and to be honest tasteless, neither my husband or I could smell it cooking. I'm all for healthier eating but it has to taste good. Plus compared with other bacon dearer.

Far too thin and fatty.

This was given as a substitute for Edwards of Conwy bacon. It was so thin I could not get it out of the packet without it breaking up. In fact, I would say it was the thinnest bacon I have ever seen. There was a lot of fat, and by the time it was cooked, there was very little meat . I would not buy this product .