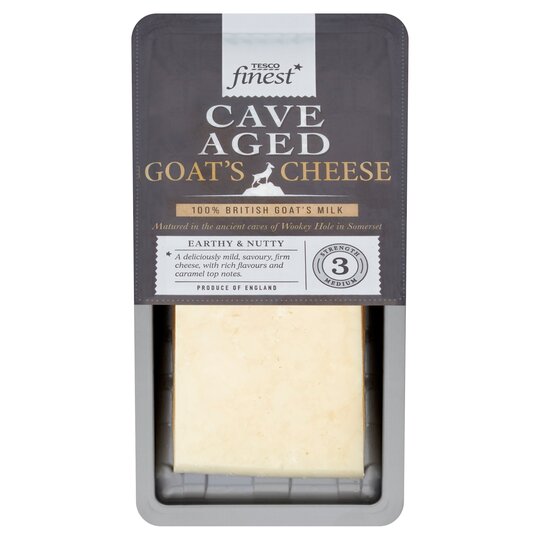 Keep refrigerated. Once opened, consume within 1 week and by date shown.

Produced in the U.K., using milk from the U.K.
Made using British Milk.

Put's other brands cave-aged to shame. It's exquisite almost. However I will say that they need to do some things : Improve on labelling, it should say not suitable for vegetarians due to the Pork Lard. However they should also clarify that most of the lard is in the RIND, which is inedible and supposed to be cut-off anyway.

Would have been better left in cave

Awful taste redolent of goat droppings horrible rubbery texture best left in cave for good never to be sold revolting. Leave goats cheese to the french they know what they are doing.

I did not expect to be eating pork fat in this cheese. As per other comments, this ingredient should be indicated on the front as it's something you expect in cheese.

Tasty for a goats cheese..... Possibly because it

Tasty for a goats cheese..... Possibly because it contains pork fat! Value for money.

Not vegetarian, pork fat in the rennet!!!

Not vegetarian, pork fat in the rennet!!!

This is not vegetarian. It has pork fat in it! This should be clearly stated on the front

Has pork fat in the ingredients

It was tasteless and also had pork fat in the ingredients