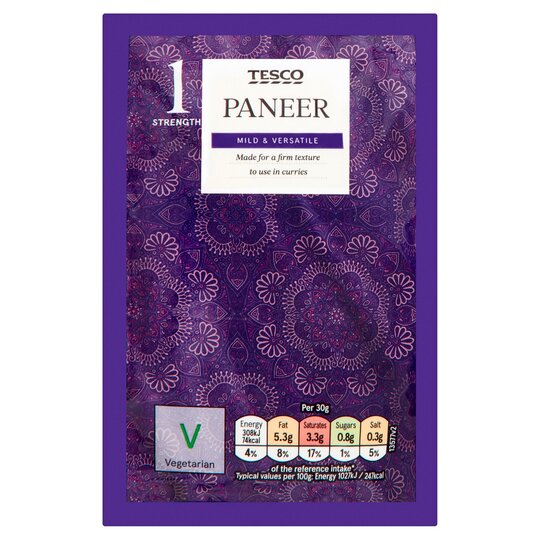 Keep refrigerated. Once opened, consume within 3 days and by 'use by' date shown.

We did not rate this as a good quality paneer, it

We did not rate this as a good quality paneer, it was not a good example of its kind. The texture and taste were simply not right and it was too salty. Will definitely not buy again.

Not as good as the previous paneer

Something has changed - dont like this at all. Will make my own!

Fantastic product. Bought it as didn't have time to make paneer. Excellent for use in ethnic cuisine. Used it for palak paneer, Salad constituent and for BBQ too. Bigger family pack of 500 gms would be helpful. Best paneer available in UK.

A cheap hard block, about as far removed from the

A cheap hard block, about as far removed from the smooth delight of proper paneer. Definately a product made for the least money sold at a price to maximise Tesco products. It cooks really poorly, sticking to a pan rather than toasting as proper paneer should. The result is a messy pan and scortched hard lumps, sort of like bitter but otherwise tasteless drying window putty.

Perfect to add a Spanish meal

I love paneer i use to buy this product in London in the Indian shops, the one you sale is not the same but is quite nice

Best paneer I have had in UK, very soft and tasty

Best paneer I have had in UK, very soft and tasty and makes a great curry

Indian Paneer is not salty. Its bland and Indians

Indian Paneer is not salty. Its bland and Indians or South Asian can use a bland Paneer in many different ways. A Salty paneer is only for curry. Advice: Bring out a non salty paneer. The quality of paneer otherwise is much better than other two available in store. Thans

Its deliciously creamy and cooks really well, i li

Its deliciously creamy and cooks really well, i like it much better than the other brands.

salt not mentioned among the ingredients

The texture of paneer is good but its too salty and in the list of ingredients salt is not even mentioned.I don't think i can use it too often because of salt.It will be excellent if salt is removed as it can be useful for sweet dishes as well.Thank you.