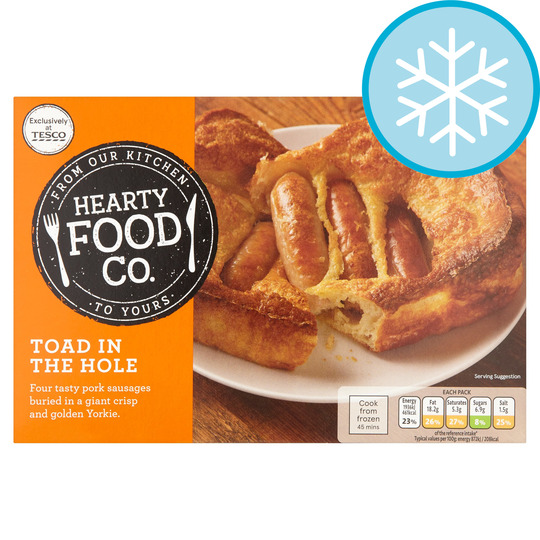 Instructions: From frozen: 210°C, Fan 190°C, Gas 7 40-45 mins Remove outer packaging and film wrapper. Place foil container on a baking tray in the top of a pre-heated oven for 40-45 minutes or until crisp and golden brown.

Produced in the U.K., using pork from the EU

No Toad in the Hole

Ha! My Toad in the Hole was devoid of any sausages. Very strange. I complained to Tesco but they say they are too busy to provide a response.

For the price you pay these are great. Sausages are not going to be brilliant at this price and if that's what your expecting then don't buy. As regards cooking I have Never had a problem, it rises well and is soft at the bottom because of the oil, otherwise you would not get it out without sticking.

It won’t cook. Followed instructions. Cooked at the stated temperature for 45 minutes but the pudding remained completely raw. It has a best before date of JAN 2021. Batch L0026 10:35

Absolutely awful, even after an hour of cooking, bottom was still raw! And sausage was uncooked! Disgusting! Never again

This product has always taken longer to cook than stated, be it 5 or 10 minutes, but was edible. Now, it has taken 1hour 30 minutes to cook and is still not ready to eat. I had to eventually take it out of it's cooking foil tray and turn it over to try and cook the bottom. Sausages were eaten, the rest was put in the bin.p This product is shocking and should not be available to buy!!!!!

I know you get what you pay for but this was inedible. Went straight in the bin. Disgusting!!!

Not worth a minute in the oven

I've just put it in the oven for 45mins as instructed. If I knew it takes so long, I would have never bought it. Can make a decent meal myself in such a long time. Will rate and post after I taste it. Better be good. Sausage barely edible. Reminds of Richmond, though not as bad to be honest. Still not for human consumption. The rest, I don't know what that is :D some kind of crest... volcanic in origin probably... What a waste of time.