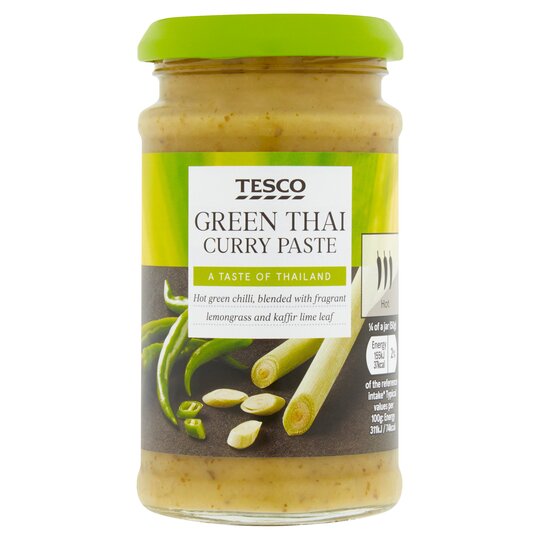 Store in a cool, dry place. Once opened, keep refrigerated and consume within 7 days.

Caution: This product can contain small fibres which come from the lemon grass and lime leaves..

Unusual but will buy again

I wouldn't call this a typical Thai Green curry so go in with an open mind, but had a nice taste and good amount of heat. I added 1 diced green pepper to bring out the flavour.

Look for a better paste! Not a sauce

Gloopy and lacking flavour, not a paste more of a cook in sauce, there are lots of better products, if you have used this as a first time attempt to make Thai curry, please don’t be put off it’s usually a lot better!

Simply awful. Does not resemble anything like green curry paste. Colour, smell and taste extremely bad. Will be returning back to the store.

Way too hot, instructions say to use whole jar but a couple of spoonfuls is enough, very bland taste, not really a paste.

Not a paste, more a sauce

Read about this product BEFORE you buy it. It's not really a curry paste, where you put a tablespoon or so in your curry to flavour it. This product uses the whole jar in one go, so is really a sauce rather than a paste. Needs to be renamed.

I don't understand why you changed the recipe? The original was AMAZING and this (so called improved) recipe is filth!! In fact I have cooked a Thai Green Curry since :-(

Don’t bother with this tasteless liquid in a jar

If i could rate it zero i would. This is a dribbling slop rather than a paste - very little in the way of smell and i’ve just wasted all the ingredients as there is little in the way of taste either. I was desperate so i bought this but save your money and buy a proper paste instead - this imitation liquid in a jar just isn’t worth it.

This has become a cupboard staple for us. Mixed with coconut milk it makes a great thai green curry sauce. So tasty with a bit of spice to it. One of our favourite dinners!