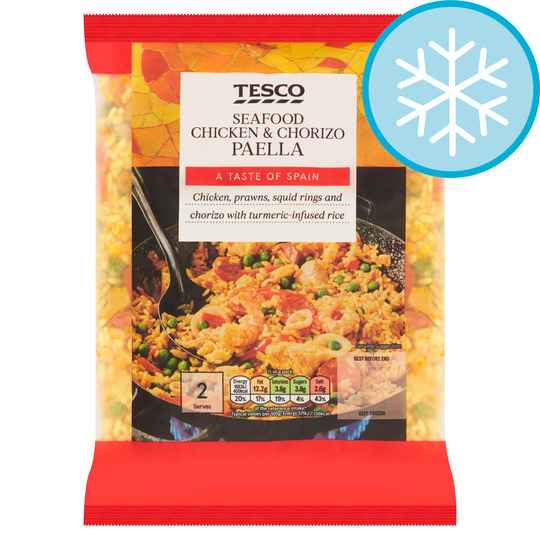 17%of the reference intake
Saturates
3.8g

19%of the reference intake
Sugars
3.8g

4%of the reference intake
Salt
2.6g

43%of the reference intake

Stir Fry
Instructions: For best results cook from frozen. Heat in a heavy based frying pan or wok. Add 1 tablespoon of water into the pan. Stir fry for 7-8 minutes.

Disappointingly few chicken or prawn pieces with a

Fantastic easy 10 minute paella, if you can get it

Great value, delicious, healthy and so easy to prepare. I keep these in my freezer and can make a tasty meal in 10 minutes. Just chuck it in the wok and cook - that's it! I see Tesco (Linwood) look as though they may stop stocking this and are promoting other, not so tasty, chinese, mexican and Itsu oriental products. Be warned Tesco, all the other supermarkets stock Seafood, Chicken & Chorizo Paella for the same price and I will stop shopping at Tesco if I have to go elsewhere for this paella!

A tragic fall from grace

This now shows as out of stock so it is conceivable that has suffered the fate of declining quality to the point that it has been taken out back and shot... This used to be a household favourite but the recipe has been butchered - all rice, fewer prawns, different chorizo and an absence of squid - all with the culminative impact that it tastes bland, uninspiring and unlovable. It was once (an arguable) taste of Spain - although do NOT mention that it contains chorizo to a Valencian - but is now more of a thinly acted 1970s sitcom pastiche of a taste. Sorrow pervades my tastebuds at this fall from grace.

Used To Be Great, They've Ruined It.

What have you done to it? Was so good before taking the squid out and packing it with red peppers. Something has changed with the flavouring as well, used to be a nice yellow colour, now much redder.why interfere with something which obviously sold well as it was often out of stock, almostl certainly changed to save a quid during production and increase your profit margins even more.

Used to be great, new recipe is tasteless, won't be buying again

Hope to have this back

The best I have ever had. Such a shame it’s discontinued. I would pay more for the same quality and quantity. Hope to see this back.

Advertised as "New" paella and yes it is and it's not good. The old paella had squid rings and a decent amount of chorizo, prawns and chicken, this one does not! It's supposed to be a meal for two but the pack I just cooked had 3 prawns, 3 tiny circles of chorizo and 6 pieces of chicken. No squid in the new packs, the seasoning is barely there, it's now just rice and vegetables, definitely not a meal for two! My 10 year old daughter usually eats it as she loves squid and prawns but after eating the new recipe she said it was tasteless and asked me never to buy it again. Tesco, you have ruined a nice meal.

Delicious but we pick out the squid. We'll miss th

Delicious but we pick out the squid. We'll miss this product.

Eatable, nothing special. Decent amount of small prawns in the pack I got, although they were purplegrey which made me wonder if they were bad. However after googling turns out this is normal with some prawns and the "right" colour turned in once heated and tasted fine. Nothing to write home about but easy to cook and cheap.