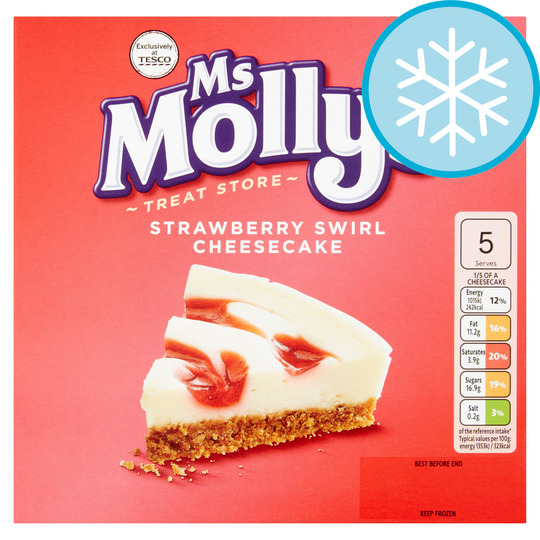 Took one mouthful and that was as far as it went. Cheap and nasty...should have known from the price what to expect. The tasteless biscuit base just fell apart and was far too sugary and the strawberry swirl flavouring was a poor fake. Don't waste your time on this one, pay more money for something edible and enjoyable.

My children had the cheesecake as a after dinner and they all love it. Plus they have asked if they can more in the weekly shop.

Delicious. Well worth the price .

Delicious. Well worth the price .

The price says it all.

Basically you get what you pay for and in this case the price says it all. The cheesecake base was just a soft, tasteless mush whilst the topping wasn't much better. Had to throw the rest away.

Awful. cheap and nasty. Base was dubious and sugar crystals could be seen - think the manufacturers are using loads of sugar to mask any real taste. It doesn’t cost much to make a cheesecake and I won’t be bothering with buying again. (This was bought as we were away and I thought I would have a break from cooking!)

It wasnt awful, but the cheesecake part did not have much taste.

Tasty, cheap, would give 4 people a decent sized slice.

I like this topped with fresh strawberries. I don’t think it’s that special just on its own. Very reasonably priced so makes a good afters. Sometimes also add sliced banana. Base sometimes a bit crumbly.