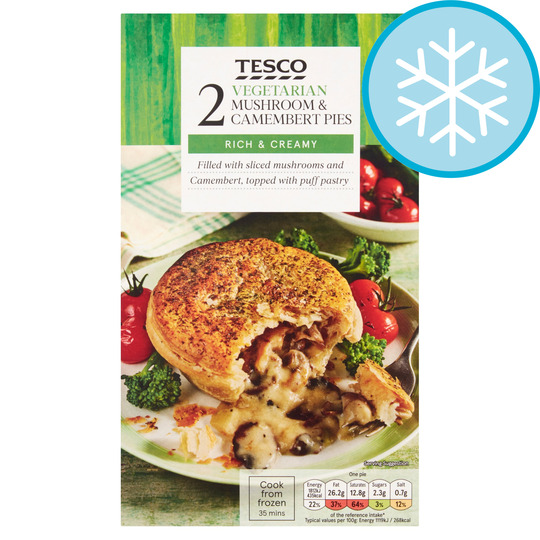 Keep Frozen at -18°C or cooler. IMPORTANT: If food has thawed, do not refreeze.

Very disappointing taste, all sauce no filling.Should not have been approved for sale by product researchers.

Nice bits let down by pastry

Followed instructions and cooked it in the foil tin - the bottom was still raw even as the top was very brown. Next time cooked it ut of the foil and the base was just barely cooked but the whole thing collapsed into a squat pancake. Shame as the sauce was very nice although very little of it and very few mushrooms.

disgusting. I'd give it zero stars if I could. The base pastry is too thick so the top is practically burnt but the base is still uncooked and chewy. Can't remove it from the foil case without the top coming off, because the base isn't cooked. The filling is completely unseasoned and watery, Camembert adds nothing to this, doesn't even melt inside while cooking so you're left with tasteless chunks. Mushrooms were mostly stalks.

A teaspoon of grey soup.

This was little more than a stodgy pastry soup bowl with a teaspoon of something soup like, shame because the flavour of the soup like liquid was pleasant enough just this wasn't a mushroom & camembert pie it was merely stodgy pastry with a grey sludge in the bottom.

Very cheap pastry with a teaspoon of mushroom soup in the bottom. Nothing like the box so don't waste your money.

Not much filling, sauce leaked. But I will take inspiration from this and make it myself, using a filo pastry top so it's less stodgy.

This was the worst pie I have ever had, it contained one small slice of mushroom only ( each pie in the pack had the same lack of ingredients. The sauce was like a small amount of mushroom soup. Absolutely dire. Avoid.

The top crust is misleading as that was quite nice. After that it goes down hill as you get to the bottom. The filling was watered down cream of mushroom soup with no taste of camembert. The worst part was the bottom pastry that could only be described as raw and inedible. Not sure what to do with the second pie now...!

Contents of the pie were more like a soup, hence the pastry didn't cook, it looked nothing like the picture on the box; I had 1 slice of mushroom with no evidence of the cheese - however, the flavour was good, but not enough to re purchase.