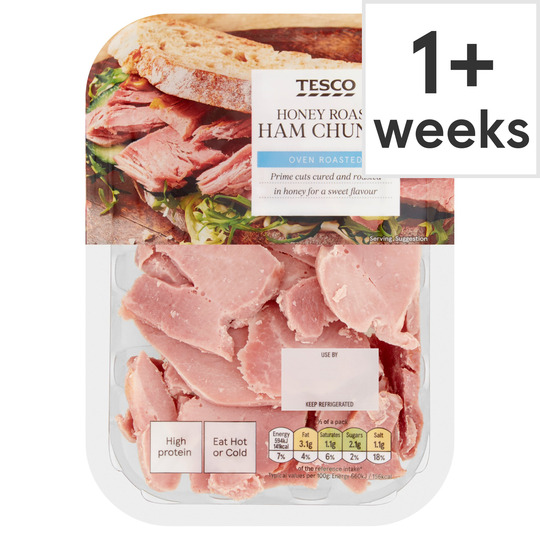 Instructions: 800W / 900W 2 mins / 1 min 45 secs
May be eaten hot or cold. If heating, empty contents onto a microwaveable plate. Cover and heat on full power.
Leave to stand for 30 seconds after heating.

Wish I'd read the reviews before buying. Tough and

Wish I'd read the reviews before buying. Tough and tasteless. Proves that looks can be deceiving.

This had no taste at all. In fact, we had a mild panic that the whole family had Covid as we couldn't taste anything, but then realised we could taste every other part of the meal and it was just this ham. We'd been sent two packs as a substitution for ham hock but what a disappointment. Won't be getting it again.

Horrible stuff. The chunks are big, but they're al

Horrible stuff. The chunks are big, but they're also very firm so difficult to shred or tear apart for sandwiches.

Awful stuff. So tough! I was so disappointed as was looking forward to a nice bit of tasty ham. Had no flavour and was fatty and horrible!

I wouldn't recommend it for sandwiches etc but it's great for cooking, chicken leek and ham pie, pasta dishes etc and will be a regular buy for me from now on for this purpose

Bought this ham to have in my salad. Binned it as it was just awful. Disgusting. Tastes horrible. Nothing like ham. Hard chewy yucky!!!! Never again!

This is not ham

Do not buy. Its horrible. Looks good in packet but tastes awful. In fact no taste of ham at all !!! There is some semblance of something sweet going on but that's all.. Probably all the sugar they've put into it!! I really pity the pig that gave up its life for this. Chucked it out.

Really tough and unappetising, I threw this out.

Really tough and unappetising, I threw this out.