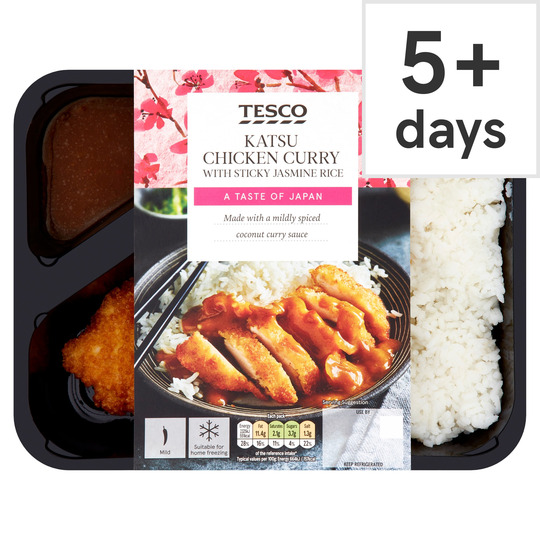 Suitable for home freezing. Ideally freeze as soon as possible after purchase but always by 'use by' date shown. Once defrosted use on the same day and do not refreeze. Not suitable for cooking from frozen. Follow the preparation guidelines above. Defrost thoroughly for a minimum of 12 hours in the fridge. Keep refrigerated.

Instructions: Peel back film lid and remove chicken. Chicken: 190°C/Fan 170°C/Gas 5 20mins Place on a baking tray in the centre of a pre-heated oven for 20 minutes. 3 minutes before the chicken is ready, heat the rice and sauce compartments in a microwave as below.

Instructions: Snap off sauce compartment.
Pierce film lid on the sauce and rice compartments.
Rice and Sauce:
800W / 900W 3 mins / 2 mins 30 secs
Heat the rice and sauce on full power.
Stir before serving with the chicken.

Made using chicken from the EU.

I'm sorry to say I was quite disappointed with this dish It was very bland - almost tasteless. The chicken had the texture/consistency of chicken nuggets (but is labelled as "Chicken Breast") but was tasteless and the sauce was just a big nothing. I was looking forward to trying this as I had noticed it on the shelf and it looked nice - then I watched a programme about Japan and they mentioned this dish, so I was really keen to taste what it was like. Major let down I'm afraid. Usually I find Tesco branded items are fairly reasonable quality. I won't get this again, but if I was given one (say) I would definitely doctor the sauce to liven it up with some ginger or curry powder. Perhaps put some Sushi pickled ginger on top or on the side. It it just flavourless and bland. I don't know what this meal is meant to taste like, so maybe it is totally authentic, I couldn't say.

Not a ready meal at all

It’s not a ready meal, you can’t just put it in the microwave- the chicken needs the oven, which most workplaces don’t have... I made the mistake of trying to put it in the microwave still, for 5 minutes, and it just came out rock hard and inedible. The sauce isn’t nice either. Overall a huge disappointment.

Hardly resembles Katsu curry. Also what is the point in having a meal which half of which goes in the oven and the other half goes in the microwave? Portion size is a joke.

Change the recipe back please

This used to be my favourite katsu curry however you have changed the recipe, there is now more fat and salt content and it tastes of aniseed, the chicken piece is also smaller, i’m so disappointed and won’t be buying it again

I was buying this regularly but they changed th

Lack of sauce,too much rice!

Meal lacks sauce, given the amount of sticky rice & 1 piece of chicken breast! Not worth the money paid for it!

One of the worst chicken katsu curries I've ever had. It didn't taste bad, but that's because it didn't taste of anything at all. I don't know how you manage to make katsu curry sauce bland, but it happened. I gave it two stars rather than one because the rice turned out pretty nicely and the chicken was nicely crispy, but they're the only things this has going for it.

Tasteless AND a pain as far as ready meals go; I have to cook the chicken piece separately for 20mins in the oven!! Yet, tesco seem to have replaced my favourite alternative from The City Kitchen with this one. By comparison The City Kitchen is faaaaaar superior; really tasty, similar price and much quicker and easier in the microwave.

I rarely write reviews but this was so poor I feel I should let others know! I love a good, authentic katsu curry and another supermarket offers a very decent version of this dish. Sadly thus was not the case from this poor Tesco offering. Utterly flavouless, unseasoned chicken (only determined as chicken as the box said so, it could have been tofu!), with a greasy, flavourless crumb and really fake tasting, overly fruity flavoured, gelatinous sauce. So bad that it just went straight in the bin in favour of apple and cheese. Very poor quality and nothing like the flavours you'd expect from a chicken katsu curry dish. Please don't waste your pennies...

I have bought this several times as it has become a bit of a favourite of mine.