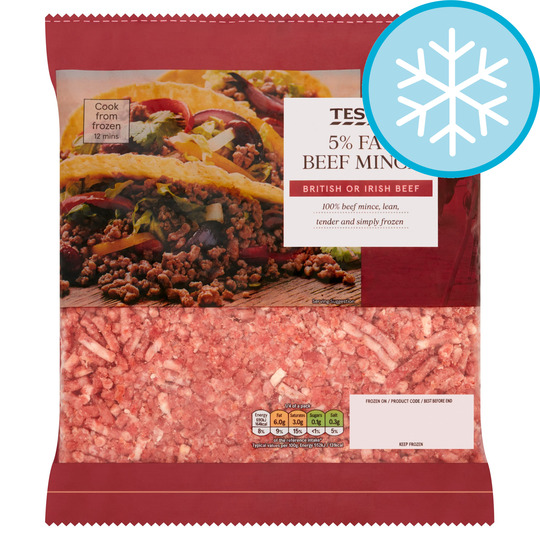 9%of the reference intake
Saturates
3.0g

15%of the reference intake
Sugars
0.1g

Excellent. This is frozen, raw mince that I defrosted before use. I was as good if not better than fresh mince and a superb price! I bought it because there was no other mince available at Tesco unbelievably and I expected the worse and was delightfully surprised at it’s quality and made Cumberland Pie with it. If you’re following the rules correctly, then there shouldn’t be any disappointment.

Awful! Turned to purée, grey in colour and tasted like nothing I could ever describe. This was not minced beef as I’ve ever known it!

I have until just recently always used fresh mince which can be hit and miss. As there wasnt any 'fresh mince' just recently i turned to frozen mince and was surprised at the final result (spag bog) Cant understand what people are complaining about. This frozen mince is RAW so has to be cooked from frozen, and probably cook it a bit faster than you would do with fresh mince. I think i'll have this frozen mince on my shopping list for a long time.

After I defrosted it it was completely raw

After I defrosted it it was completely raw

I actually prefer this to the fresh mince now I've tried it. I made a no bean chilli in my slow cooker, and it was softer but with the same flavour as fresh mince.

nasty even dogs wouldnt eat it ore than once

disgusting taste, junk meat. so bad my dogs got the runs after eating it and refused to eat anymore. food shortages still at tesco aug 2021. i cant get lean steak mince fresh for 3 weeks still. i had no choice but to buy this frozen junk for dogs as they eat natural and got to eat. im rural and need meat delivered. its more expensive too than fresh lean steak mince i lose 250 grams of meat buying this frozen instead of fresh lean steak mince for same price hows frozen more expensive. absolutely vile i cant imagine how anyone in reviews actually likes this its disgusting.

Bought this thinking of how convenient it is but turned out very dry and mushy during cooking - even when cooked down :(

i never write reviews but wanted to warn people not to buy this ... i did spaghetti bolognaise and it was really grainy and not pleasant at all .. next time there is no fresh mince i will simply do without

Not sure why but the frozen mince isn't as tasty as the fresh. It went crumby and was tasteless.

Was not nice when cooked, was very chewy. Can't say i would buy again