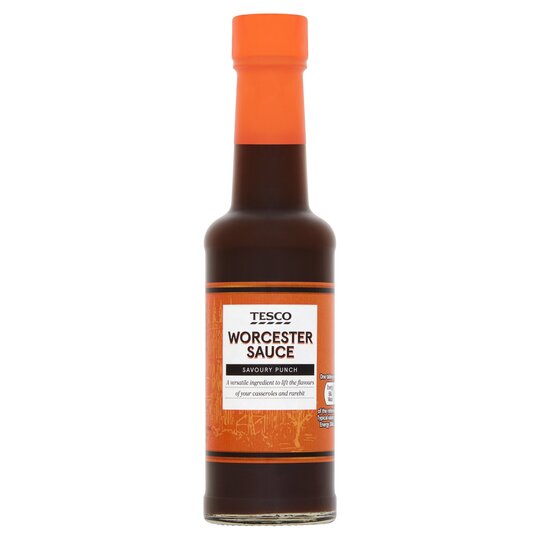 Store in a cool, dry place. Natural separation may occur, shake well before use. Once opened consume within 3 months and by date shown.

A little less 'tart' than the real deal which I suppose is a plus and a minus. But it's cheaper; and a Bloody Mary still tastes good! All in all I'll keep buying. John

The flavour is just as authentic as the original at a fraction of the price. I use it daily.

Good value, but could taste better

I used to buy a large bottle of L&P every week until it disappeared off the shelves weeks ago. I tried the Tesco brand and frankly it isn't a patch on the real thing. L&P has now re-appeared, but only in the small 150ml bottles. But as it costs twice the price of the Tesco, I will put up with it. When the better value large L&P comes back I will probably switch back.

If you're expecting this to compare to Lea & Perri

If you're expecting this to compare to Lea & Perrin's then you'll be disappointed. It's weak, insipid and Tesco use a different vinegar than the makers of the traditional Worcester sauce - and that probably explains why it tastes awful.

Disappointing. Bought it because the standard L&P was unavailable. It just doesn't taste of much. Mind you it's much cheaper.

Purchased this item as Lee and Perrins was not ava

Purchased this item as Lee and Perrins was not available. Used it once. Unfortunately will not be using it again. It is no substitute.

Giving this a try as Lea & Perrins is having difficulty with production, due to a bottling crisis, so says their spoks. A bit skeptical as the Tesco brand uses malt vinegar instead of white, because malt vinegar tends to overpower other flavours. We will see what we will see.

Bring back Lea and Perrins. It is far superior.

Bring back Lea and Perrins. It is far superior.

This is a poor substitute for Lea & Perrins which Tesco have removed from their range. It also contains a lot of solids. I will purchase Lea & Perrins elsewhere in future.

Tasteless coloured water! Not a patch on the real thing. Straight in the bin!