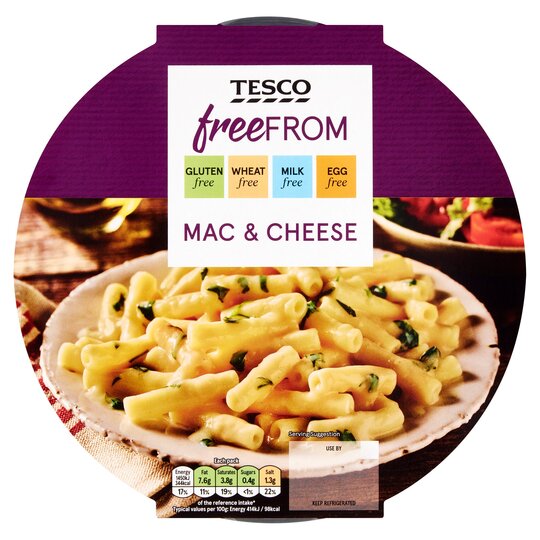 Instructions: Pierce film lid several times. 190°C/Fan 170°C/Gas 5 25 mins Place on a baking tray in the centre of a pre-heated oven for 20 minutes. Remove film lid and heat for another 5 minutes. Leave to stand for 2 minutes after heating. Stir before serving.

awful. Runny and tasteless. Free from everything including cheese

Overwhelming taste of parsley. The pasta itself doesn’t properly cook and is like chewing cardboard in texture and flavour. Tiny portion.

Disgusting flavour, very watery I had to add cornflour and grated in extra lacto Free cheese, ate as part of the low FODMAP diet and have had stomach pains for three days since. Should have just thrown it in the bin!

Ended Up In The Bin

I could maybe eat it if I pushed myself but the flavouring of the fake cheese was so sweet yet so gritty and unpleasant I decided to throw the majority of it away. Don't bother buying this product

The cheese sauce is very runny, and the parsley is too strong. Especially the stalks.

Absolutely AWFUL!! So bad I felt the need to review only to see many others have said the same things - wish I had checked before I wasted my money. The sauce was thin and bland, no taste of cheese in any way. Lots of wasted packaging too, large bowl with very little content. DO NOT BUY!!

don't do it to yourself! I hadn't had mac and cheese since I became vegan about 6 months ago. I hoped this would satisfy my cravings but I was wrong.

Free from any taste of cheese, Plastic pipes in very thin tasteless sauce.

blurgh, the pasta tasted gritty and stodgy and the

blurgh, the pasta tasted gritty and stodgy and the sauce was very runny

I don't often write reviews but this was so tasteless and bland I felt obliged to. It was very watery and even after adding lots of extra cheese it still was horrible, there is so much good gluten free pasta available, it certainly wasn't used in this dish. I will not be buying again. I will stick to my usual brand (the one with the girls name).