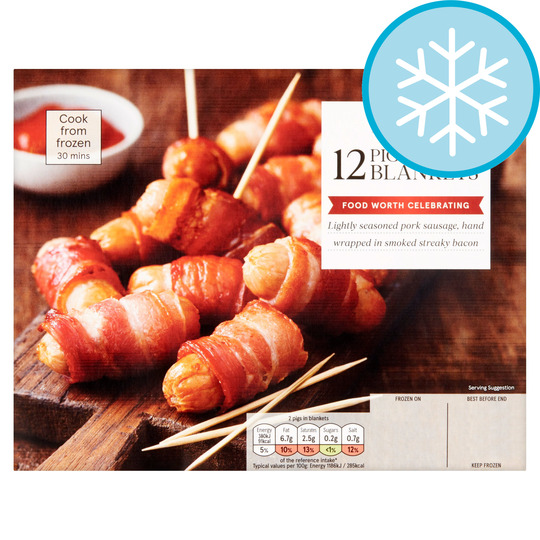 10%of the reference intake
Saturates
2.5g

13%of the reference intake
Sugars
0.2g

12%of the reference intake

Made using British and EU Pork

Bought two packs of these as I'd had them in previous years, can't believe how dreadful they were. Husband complained on Christmas Day that they tasted bad, I thought I hadn't cooked them long enough! I didn't tried them when they were cold, they had a bit of an odd taste so binned them. I used the next packet on New Years day - both times following cooking instructions 'cook from frozen', these ones I kept cooking until they were really dark brown, they were awful - I think the bacon must have been off or they were really old or even possibly defrosted and refrozen - result went straight in the bin! What was wrong this year Tesco???

All the pigs out of the blankets.

I enjoyed these as a snack

I didnt buy 3 packs at the cheaper price in case I didnt like them. However, after scoffing the lot in one sitting I can honestly say I enjoyed them. The only complaint I have got, the cooking instructions were not long enough, they had to be finished off in a frying pan but apart from that they would go well with bread and butter with a few chips.

Much too salty - very disappointing.

Much too salty - very disappointing.

The quantity was off

They were nice, but the packaging only contained 11, and though I did not weigh them, I doubt I actually got 240g worth. Make sure to count before you start cooking if it bothers you.

My Granddaughter loves pigs in blankets but when I gave her these as a treat she said they "tasted horrible" and only ate two, later she started to feel unwell and "tasting grease". I noticed there was a lot of fat coming out of them whilst they were cooking. I won't buy them again!

They weren’t nice at all...

Salty and had no flavour. Glad I bought other ones from a different supermarket. Really disappointed.

Not worth one star

I bought two packets of these - I cooked one packet and found the taste particularly unpleasant - the other pack went in the bin. I would never buy these again. Not worth one star.

Delicious and not greasy. I give them 10 out of 10

Not the best, very salty. Not on my list of buy ag

Not the best, very salty. Not on my list of buy agains.