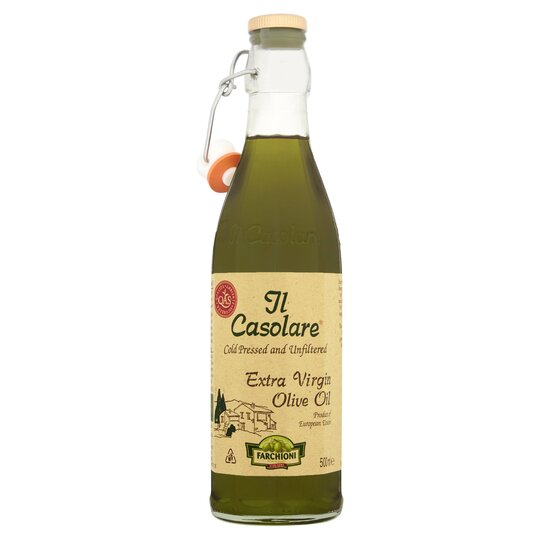 This oil may become cloudy at less than 10°C (50°F). This is normal and the oil will clear on warming. Store in a dry, cool place away from direct light and heat.

I love the flavour of the oil, but I've deducted a

I love the flavour of the oil, but I've deducted a star for the metal stopper contraption that doesn't fit correctly. At least I can use the cap.

Very nice extra virgin olive oil. It comes with a nice cap for the bottle, make sure it is on the right way, something I learnt after doing it wrong. Also to remove the green bit of plastic from the top of the bottle use the handle end of a teaspoon inserted down into the bottle and lever it off. This will enable the use of the cap.

This is unfiltered so has a much stronger flavour than filtered extra virgin. I use it in baking bread and cake, and also for dipping bread to have with cheese. Being unfiltered it would burn if used for stir frying.

The olive oil is very good quality. But the "mechanical stopper" (like an old lemonade bottle) is a nightmare. The instructions say to "carefully remove the dispenser with a teaspoon handle". I've had several people try this but no one could do it. Trying to prise it off with a knife also failed - but lots of spilt olive oil everywhere, plus the risk of losing a finger.. Ahhhhh. With the green dispenser still in place it's physically impossible to close the stopper. The usage instructions also say to "Shake bottle before Use". But without the stopper in place - I don't think so!!! Very frustrating. I will not be buying this again and could not recommend it to anyone else.

Best EVOO in my opinion

The only EVOO I have ever bought the last 23 years, as an American moving to the UK in 1997. I was introduced to this EVOO in 1995 when I came to visit my now, husband, and have never been impressed by any other EVOO for salads, dressings and drizzles, as the taste is sublime and unlike any other I have tried.