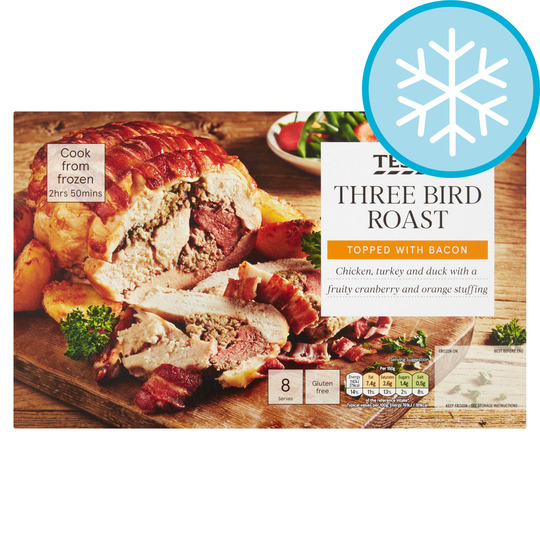 Instructions: For best results cook from frozen. 200°C / Fan 180°C / Gas 6 - 2 hrs 40 mins Remove sleeve and film lid. Cover tray with foil and place on a baking tray in the centre of a pre-heated oven for 1 hour 50 minutes. Remove from oven and carefully remove the foil cover from the tray. Place back in the oven for a further 50 minutes. Remove from the oven and check the joint is fully cooked by placing a skewer into the centre of the joint. The juices should run clear. Allow to stand for 10 minutes before carving. Remove strings, carve and serve.

I bought this on the off-chance for my Christmas joint, instead of my usual "large chicken". I am so pleased I did!!! It tasted marvellous. I do hope it is sold again next Christmas. I don't know if it has been sold previous years or not. I only saw it by chance! One of my better spur of the moment purchases!

This should be called a turkey roast as there was little else. There was the tiniest bit of duck in one slice and very little chicken. The stuffing was quite sloppy and not particularly nice. I wouldn't buy again.

Very disappointed with this.. lack of meat all stuffing... the meat what was there was very tasteless,, sever lack of meat... the stuffing was so strong in taste and soooooooo much of it... would not buy this again , would definitely not recommend

really disappointing as the stuffing was all at on

really disappointing as the stuffing was all at one end and there was very little duck meat. not a good purchase so i wouldn't buy again.