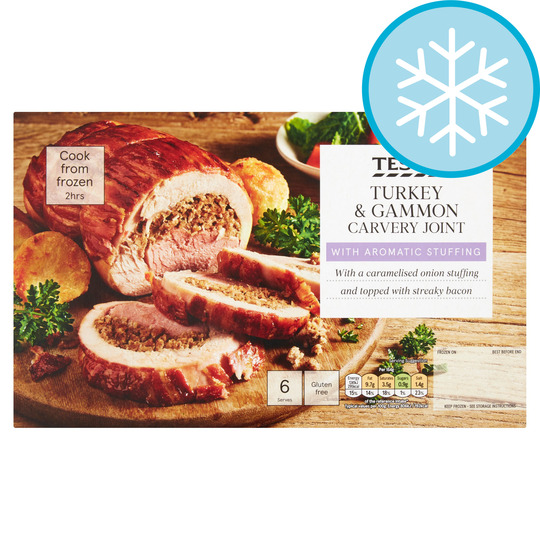 Instructions: For best results cook from frozen. 200°C / Fan 180°C / Gas 6 - 1hr 50mins Cover tray with foil and place on a baking tray in the centre of a pre-heated oven for 1 hour 15 minutes. Remove from oven and carefully remove the foil cover from the tray. Place back in the oven for a further 35 minutes. Allow to stand for 10 minutes before carving. Remove strings, carve and serve.

Turkey was tough but lovely stuffing. Would not

Turkey was tough but lovely stuffing. Would not buy again.

Awful. The gammon part had a plastic taste. Waste

Awful. The gammon part had a plastic taste. Waste of money.

Not the usual good/high standard of tesco dont buy

we bought it in place of xmas crown, it looked good, tasted of heavy smoked flavour to the point you could not identity any individual tastes, it spoilt our xmas meal, would not recommend buying it, i certainly will not be buying it again......

Great little joint would ;like to have ordered ano

Great little joint would ;like to have ordered another couple ,

Turkey was moist. Gammon was delicious. Stuffing was really good. I would buy this again in future at the quality it was like this year. I gave the product 4 stars as it took about 20 minutes longer to cook than stated.

Turkey was just about ok,gammon was gristly and hard which i couldnt eat,stuffing strong and too much.Disappointed,wont buy again.

Very little turkey and gammon was very salty, there was loads of stuffing but again very salty because it was next to the gammon. Very disappointing especially for Christmas dinner.

Just had a funny taste

Just had a funny taste

Far too much garlic

Far too much garlic in the stuffing, which then tainted the gristled gammon. Turkey itself, OK. Lesson learnt. NEVER AGAIN !! PS I am not averse to the taste of garlic, but I do believe that quantities sufficient to infuse the gammon within 2 hours is excessive.

Disappointed with this product, bought two for a pre Christmas family meal. Gammon was quite fatty all the way through and stuffing tasted rancid. Small for size just about fed eight should have fed twelve according to the packaging. Completely fell apart so serving was difficult. Very disappointing.