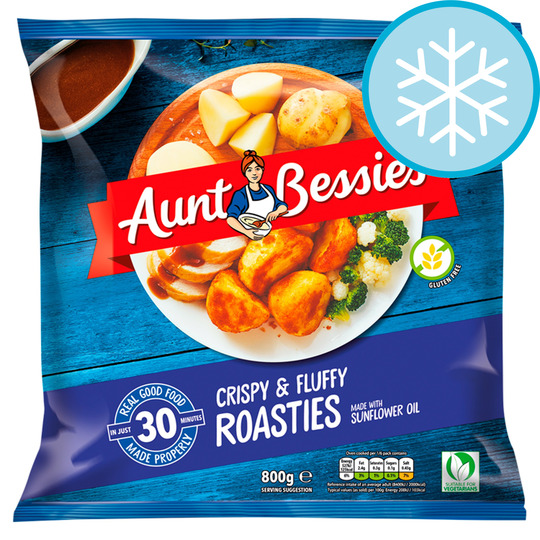 of the reference intake*
Typical values per 100g: Energy 433kJ/103kcal

Keep me frozenStore in a freezer at -18°C or colder. Do not refreeze once defrosted.

Oven cook
Instructions: Conventional Oven: Preheat oven to 230°C/450°F/Gas Mark 8 30 Mins
Fan Assisted Oven: Preheat oven to 210°C/410°F 30 Mins
Once defrosted do not refreeze. All cooking appliances vary, the following is a guideline. Take Care - product will be Hot.
Remove all packaging. Spread the Roasties evenly on a baking tray with upturned edges. Place the tray in the centre of a preheated oven and Cook for 30 Minutes until crisp and golden. Turn the Roasties at least once during cooking to ensure an even crispness. Ensure the Roasties are piping hot before serving. Serve immediately.
Not Suitable for Microwave Cooking.
For fan assisted and miniature ovens, refer to manufacturer's handbook for guidelines.

They were initially kind of like the ones in schoo

They were initially kind of like the ones in school dinners when cooked by the instructions, but I discovered if you put plenty of sunflower oil in the bottom of the roasting tin (like with making roast potatoes from scratch) they come out a lot better, really tasty and nice and crispy. Turning them in the middle of their cooking is also really important to help make all of the sides crispy. There is also a big variation in the size they're cut with the biggest ones being about 3 times the size of the smallest ones which led to very uneven cooking. Next time I'll choose to do a batch of smaller ones or a batch of bigger ones rather than mixed sizes. I found the larger ones need longer to cook than the suggested timing. I'll probably buy them again because they were very low effort and are much tastier now I've figured out how to get the best out of them.

Best roast potatoes! Even compared to making my own these are great just pop them into the oven / Ir fryer for twenty minutes and there done taste amazing, I sprinkle with garlic & rosemary makes them even better.

Very nice but they should make sure the potatoes are the same size as each other in the pack. There was one huge one with the rest small. I don't mind as I think the small ones cook better and quicker. I always put them in sunflower oil. They don't have to be swimming in it but they do need to be coated and a bit of oil for the dish. Turn them over half way through. I cook them for longer than the packet recommends. Cook them until they are crispy or soft enough for you. I always cook them in my glass pasta bake, baking dish. All ovens work differently so if you are following the instructions to the letter that's why you may be disappointed. I haven't had to peel a single potato since these came out in the market. But I only generally eat roast potatoes over Christmas! Yum!

Yes and i used it for a roast beef on Christmas

Yes and i used it for a roast beef on Christmas

Best Roasties in the market

Love these roasties - since trying these I have not made my own, which I used to do. My only regret, and the reason I gave 4 stars instead of 5, is they have become too small. Aunt Bessies crinkle chips are the best also, wish Tesco would restock them.

Love these always buy them but why does Tesco not sell the chips?

I wish they would use larger potatoes, the ones th

I wish they would use larger potatoes, the ones they use are children,s size, and we usually use double the quantity to make up for lack of size. Apart from that thy are very nice.

Roasts are back on my plate thank to Aunt Bessie's

I haven't been able to eat traditional home cooked or restaurant roast potatoes for some years due to a stomach condition but Aunt Bessie's Roasties don't seem to cause the same problem.