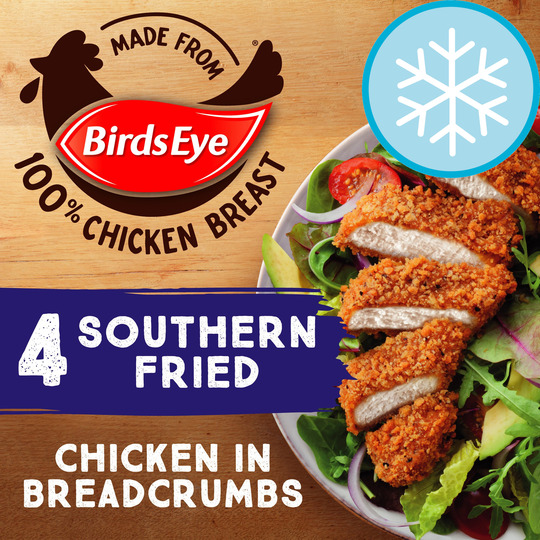 of the reference intake*
Typical values per 100g: Energy As Sold 100g Provides

Cooking Instructions
Instructions: To Prepare...
Your Southern Fried Chicken contains raw meat, please ensure that it is Cooked Thoroughly until piping hot throughout. Tastiest when Oven Baked Straight from the Freezer.
- Please ensure food is cooked until piping hot.
- These instructions are guidelines only.
- Do Not refreeze after defrosting.

I rarely buy packaged food, preferring to cook my own food, however, had these in the freezer for my grandchildren when they cost (they are fussy eaters), and last night I tried them. Pleasantly surprised, so much so, I ate all 4

Nice flavour, not so nice chicken

I’ve bought these for quite a few months now and up until recently I’d have given them five stars but the past few weeks they’ve had horrible bits of chewy grisly chicken in, so much so that yesterday we ended up throwing them away. The flavour of the coating is very tasty but sadly I won’t be buying them any more.

Just settled down and cooked this product for some wraps. Expecting the product to be 100% chicken breast I imagined that this would actually be a chicken breast or something resembling such. Far from it... so it appears that this is reformed chicken which comprise of 53% chicken. I didn't expect that this would be 100% chicken as obviously there is the coating, spices etc... but the picture on the box appears as if it was whole chicken as opposed to a solid mass of processed chicken mix, with the texture of plasticine!!