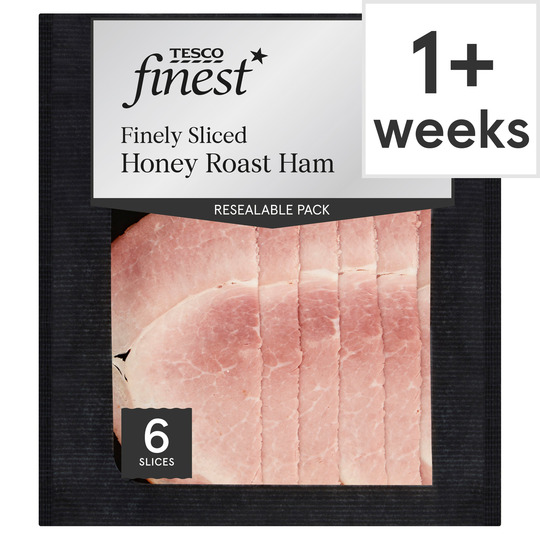 I thought this was the most flavoursome ham I have ever tasted. I honestly loved it. I definitely recommend and will definitely purchase again.

A lot of people say this has no flavour but I personally found it to be very flavourful, the only problem was it was an overwhelming flavour of honey. There was no real ham flavour, just honey. The slices were very thin and were sat in the bottom of the packet rather untidily. I knew it was like this when I bought it though so it was not off putting to me.

Will not be buying this again !

Looked nothing like the photo. Slivers of ham all different shapes and sizes stuck together and virtually impossible to separate. Won't be buying this again !

Nothing 'Finest' about this cheap nasty ham.

Nothing finest about this - it's 'formed' ham, which means offcuts of 'proper' ham which get chopped up with a load of additives, chucked into a giant industrial mixer, cooked and then pressed into a mould and 'sliced' to resemble a real ham. The ultimate in cheap, over-processed factory food, and only marginally better than 'reformed' ham which I would urge anyone to never buy (do some research on what 'reformed ham' actually is). There is no practical difference between this and the much cheaper standard formed ham in Tesco's range, so save the premium on the price and buy that instead. Alternatively, visit a proper butchers and buy some real ham cut off the bone if you want 'finest'.

Taste is ok. But as for ‘slices’ forget it. The ham is so tightly packed there is no way on this earth that you can separate it. And most of the time it’s just a mangled mess of pieces. Plus it’s usually striped with strings of thin gristle. I won’t be buying this again.

Small pieces. Not value for money

I find this product very lovely and have been known to grab pieces out of the pack which end up straight in my mouth. I seriously dislike fat, so it has little, is still very tasty and very important for me/health, rarely, it contains no phosphates. The use by date was amazing and it is a pretty necessary staple to have in the fridge until our next shopping date.

Thin sliced - but not easy to see on line!

Thin sliced - but not easy to see on line!

I was very disappointed. Instead of the nice slic

I was very disappointed. Instead of the nice slices you expect in the Finest range I received a bag of bits in the bottom of the bag.

depends on what person picks it for you

This ham when you get it not grey & totally unuseable off, that the person picking on it can clearly see, but doesn't care & thinks it's fine to do that to shoppers that are shielding, that can't get out to shop, 4 out 5 times, thrown away, won't give it be buying again, shame cos nice ham when you can get a good pack of it!