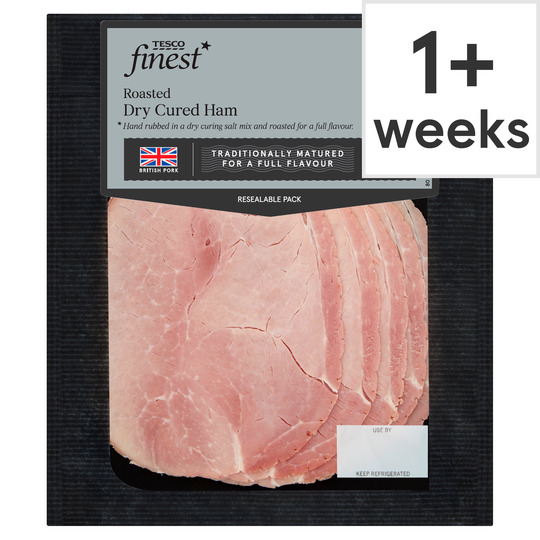 Does tesco have any ham that isn't formed?, you may as well buy the cheap stuff! If you have perfectly good finest pork dry cured ham, why would you then form pieces together? To produce cheaper ham from off cuts and market it as something special to maximise profits. Terrible product. You can get real unformed ham at these prices!

Still 3 days in date and kept in fridge but already turned green!

Tastless, wet - presented/packaged as a premium product, but has the appearance and taste of tinned ham. Dog enjoyed it !

Not fine. Too salty.

Much too salty. I won't buy this again. Not good enough for the 'finest' range in my opinion.

Yes had it in sandwiches.very good

Yes had it in sandwiches.very good

The ham is very salty, I won't buy it again.

Very variable of late. For the past few purchases it has been smooth shiny plastic ham. Not inedible but not what I expected - so much so that I removed it from my regular delivery order. The latest packet, bought in store, is back to how I prefer it - dry cured.

This was foul. It was apparently well inside the use by date by about 5 days so cant have been off, but upon opening the packet it smelled of old running shoes. Ok, so ill leave it out on the board for a while and hopefully that will pass. Unfortunately not. I nibbled it to make sure I wasn't being hasty. Tasted only of salt and not much else. The texture and leanness seemed fairly good but the smell taste not so. I'll stick with the non-finest Tesco ham which is leagues better IMO.

I would recommend you give this a miss

Awful. full of fat and tasteless. Would not buy again and wished I had not bought it this time. Went in the bin. What a waste.

Pure salt, to the point of being inedible. Absolut

Pure salt, to the point of being inedible. Absolutely vile!