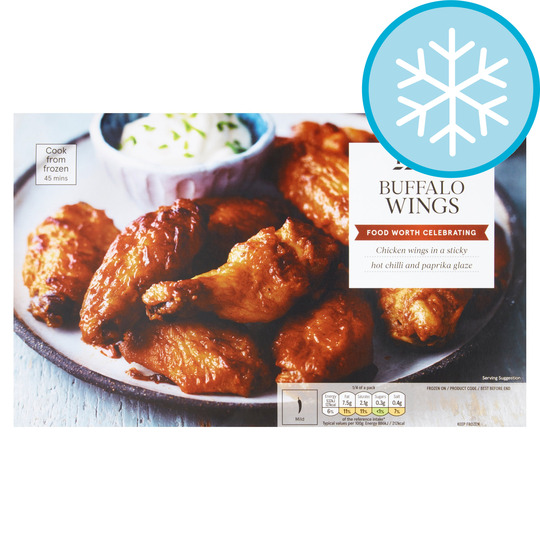 11%of the reference intake
Saturates
2.1g

11%of the reference intake
Sugars
0.3g

7%of the reference intake

Instructions: For best results cook from frozen. 190°C/Fan 170°C/Gas 5 40-45 mins Remove sleeve and film lid. Place foil tray on a baking tray in the centre of a pre-heated oven for 20 minutes. Remove from oven, turn wings and place back in the oven for 20-25 minutes.

Made using British and EU Chicken.

Caution: This product will contain bones.

OK usually but not this time

This product is usually ok although it really is just tiny pieces of chicken on the bone and so a bit expensive for the amount of chicken. However the most recent purchase contained a huge piece of congealed fat shaped like a chicken thigh. It took up the space of at least 3 pieces of chicken which were obviously missing with this horrendous blob in their place. The blob obviously went straight in the bin - one third of the cost!

Awful. Didn't taste of anything, other than water and chicken fat. Cooked them as directed but looked nothing like the picture on the box. Not worth the money.

Great if you love vinegar all over your chicken

These tasted like someone had attempted to disguise the quality of the meat by steeping the wings in vinegar! The result is a very sharp flavour that has no other notes, just a vinegar tang, and subpar meat. When after they’d been in the oven long enough for the aroma to escape, it became clear the state of the “marinade” (I use that term very broadly), so I poured off the accumulated cooking liquid and smothered the wings in a sweet/smoky bbq marinade in an attempt to offset the sharp smell & taste of vinegar. This made them edible, but only just.

I wouldn't have glazed chicken in a luckybag

i can not understand why they glaze chicken before removing the skin. it really does imply that they expect people to eat it. Well i dont eat it so the glaze on any chicken goes in the bin. i make my own instead.

Awful made me feel sick chicken not good and the s

These are disgusting. Really strong vinegar taste? Avoid unless you really like vinegar.

I so wish I had read the reviews first, absolutly

I so wish I had read the reviews first, absolutly awful, might as well through your money in the bin, because the whole lot went in !! very bad old fatty smell, The product needs removing Tesco,you should be embarrased to sell them!!

Not a nice sauce

The taste of these wings really was not great at all. Not to our liking at all.

These were awful. We both had one bite and threw them away. Very disappointing. Sauce was very runny and the chicken smelt bad.

If they were chicken buffalo wings ! It must have

If they were chicken buffalo wings ! It must have been a very small buffalo.