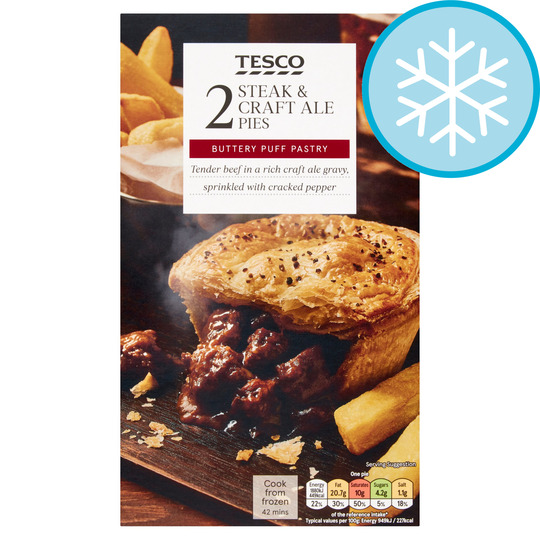 Instructions: 200C/200C/Gas 6 35-40mins Place the pie in its foil on a baking tray in the centre of a pre-heated oven for 35-40 minutes, until pastry is golden brown. Allow to stand for 2 minutes before serving.

Mostly gravy and that did not taste very nice

These gravy pies are very tastey. Gave an extra s

These gravy pies are very tastey. Gave an extra star due to Tesco including a free game inside. It was called "find the steak"....... Impressive, especially when xmas has finished after all. Paulsur.

Nice pastry, good veg, where is the steak, once ag

Nice pastry, good veg, where is the steak, once again.

Literally 2 pieces of meat. Just pastry gravy and air. Don't waste your money. Nothing like the photo shown. We've bought a couple of these to see if it's a one off. Definitley not.

Not worth it unless you want just gravy and pastry

Lovely gravy shame there was no steak what so ever in either of the pies and far to much cracked pepper on top.

It was full of gravy and some minced fat unfortunately but the pastry was nice.

I've just had one of these pies and I'm very disappointed. The picture shows big chunks of meat flowing out of the pie but the reality is this was a gravy pie with two small chunks of meat. The pastry is very nice, the gravy delicious but just no meat to speak of and definitely nothing like the picture advertised. Poor show Tesco.