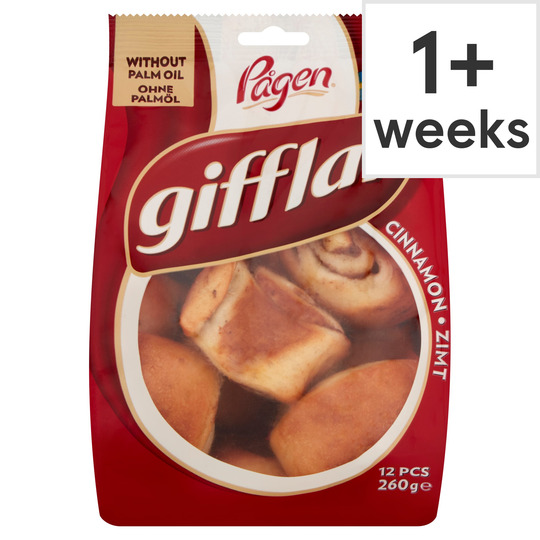 Best Before: See base of pack.Store at room temperature and once opened in an airtight container.

Buy 2 bags, one for unpacking, one for later

Love these soft little rolls, they have just the right balance of sweetness and cinnamon. Totally more-ish and impossible to leave a half empty bag so I genuinely wouldn't know if they keep past a day! A regular in my shopping list (at least 2 packs as one gets opened while I'm unpacking the shopping!).

These are so good. Soft, chewy buns, not too sweet, with a cinnamon swirl. Lovely with a cup of tea.

LOVE THEM SO MUCH

I never knew they were selling in Tesco’s. I’m so pleased. I love these yummy buns so so much. I can’t stop eating them the soon I purchased. I always buy more than 8/9 packs. If I could I’ll get over 20 packs but some of times we do buy over 20. Love them so so much. I really wished that Tesco's sell the vanilla flavour as well. I do recommend a lot.

Once you start these, they are not easily put down

got these as a swop and tried them and they were great chewy and taste absolutely lovely with a hot cup of tea do hope I will get these this time, as they were out of stock last order.

Surprised how nice these are, hot or cold! Go very well with melted butter and icing! Will buy again

Give them a try

These little cinnamon treats take you by surprise. At first they are unfamiliar and we weren't sure we liked them, but then they crept up on us and now we like to have them in the cupboard. They're perfect with an after-dinner coffee, just big enough to satisfy the munchies, but not so big you feel guilty afterwards. We heat them for 1/2 minute in the microwave, which softens them and brings out the cinnamon flavour. As other people say, they aren't like other cinnamon buns and the like, so don't expect that - less sweet, for one thing, maybe a little firmer. We're glad we gave them a try and will reorder fairly often.

They were fine and a but doughy, not special enough to want to buy again.

Leave them alone - too nice

I really like these and cinnamon is very good for one. Did one know? Anyway, don't tell anyone about them as we want them all. Sh

I bought these because of all the great reviews, but was very disappointed. The cinnamon taste is mild and the pastry is chewy in a bad way. They’re better heated up (microwaved for 10 seconds) but still not great. I will be able to finish the pack, but I wouldn’t buy them again. Have you ever had an American-style cinnamon roll or a churro? If not, you might love these. But if you have, these are likely going to be underwhelming. There are much better cinnamon pastries/dessert items out there.