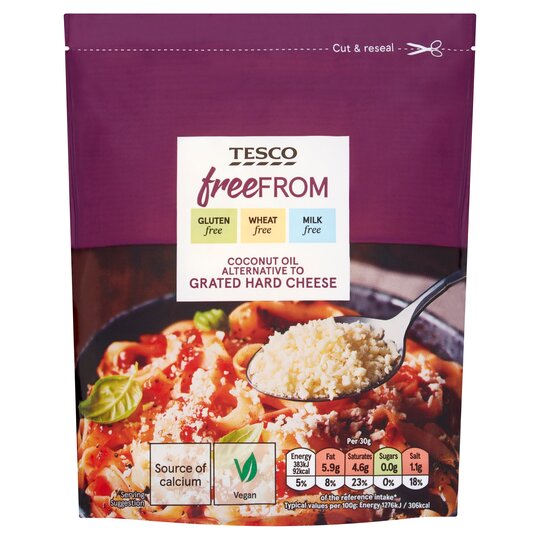 Keep refrigerated. Once opened, consume within 7 days and by best before date shown.

I like it. It’s quite salty so usually I’m careful with the rest of the food’s condiments. I use it a lot to sprinkle the top of roasts.

I’m obviously in the minority here because I’m obs

I’m obviously in the minority here because I’m obsessed with this stuff and if they ever discontinue it I’m going to be devastated. I have it on linguine with vegan pesto and vegan butter, I mix it in with the pasta while it’s still piping hot so it goes all melty with the butter and omg it’s one of my favourite meals ever. I don’t think it smells horrible either

Despite the poor reviews I thought I would give this a try, as I miss parmesan since becoming vegan and can't get hold of any other parmesan alterative. However, the reviews are right - it smells horrible, my husband could smell it as soon as he came into the house (thought it was from muck spreading in the field behind us!!). If the smell wasn't offputting enough, the taste was not great. It adds a saltyness to the dish which is the best you can say about it really. Unfortunately this went in the bin. Well done for trying Tesco, but this one doesn't work!

this sad excuse of a cheese left me utterly disappointed, as I was expecting a vegan adaptation of Parmesan cheese but it instead tasted just as repugnant as its foul smell. I do not recommend AT ALL

Used in lasagne recipe , not that successful has very odd texture and smell , would only recommend as a last resort , look for a recipe without having to substitute cheese

Smells as bad as it tastes. Truly awful

Despite the negative reviews, I was prepared to give this a try. It was, unfortunately, absolutely vile. Without a doubt, the worst cheese alternative I've ever tasted. It smelt like bile - a very acidic, pungent stench - and it tasted repulsive. I tried a teaspoon before adding it to any food, but I'm quite sure that, had I not waited, I would have sabotaged my dish. Genuinely disgusting and enough to make you wretch

it is vegan yet delicious!!

it is vegan yet delicious!!

Give it a miss

Tasted awful, would never use it again.

I cannot describe how vile this stuff is, even the dog who loves cheese wouldnt touch it. The smell alone when opening the packet is enough to make me retch. Went right in the bin.