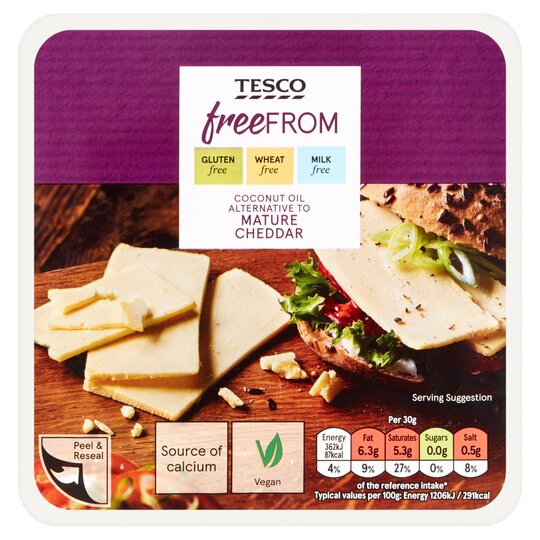 Keep refrigerated. Once opened, consume within 10 days and by best before date shown.

Dreadful stuff. I had to cut milk from my diet for my baby daughter. I took one bite and threw the rest in the bin which goes completely against how I am. Don't waste your money.

Tasty vegan cheese, love the flavour even tho I’m not crazy about cheese but I love this one

Has a really bad, overpowering fake cheese taste that gets 10x worse when melted.

This smelt of vinegar, tasted vile and made me heave. Threw it away

Your life is worth more, don't lower yourself!

Vile stuff - closest thing I could equate it to was like eating a block of butter. Horrible! Nothing like cheese - for the odd review on here saying they like it and have it on the cheeseboard etc, I can't imagine what you're used to cheese-wise but it must be awful! Straight in the bin. Hoping the haloumi one isn't as bad... At least Violife tastes something close to cheese - well, more like processed cheese slices - but it's edible. Yet to find a decent vegan cheese that's really worth eating regularly, but this is just an insult to cheese!

If I could give this less than 1 star, I would. It smells and tastes like off milk and is actually disgusting. Mixed it with a salad and that’s all I could taste. Vile. Avoid at all costs.

This was the worst thing I've ever tried. It literally smelled and tasted like vomit.

I don't normally mind coconut-based cheeses but the mixture of coconut sweetness and overpowering fake-cheese flavouring (presumably in an attempt to make it taste 'mature'?) makes this smell and taste like vomit. Avoid.

Abuse of the taste buds

I can only think that those giving 5 stars are doing so to make others suffer or they hate vegans!! It actually made me gag!! I can think of many ways to describe the absolutely vile taste and texture but cheddar and cheese are not among them.

I am lactose/dairy intolerant and avoid all dairy through illness and ethical reasons. So coming across this cheese has been a lifesaver so far. Its not left my guts aching and as for the smell, CHEESE SMELLS. If people are complaining about it, eat your normal cheddar. ( At the poor cows expense obviously.) At least I have a clear conscience, and a full belly. Even my cats like it.