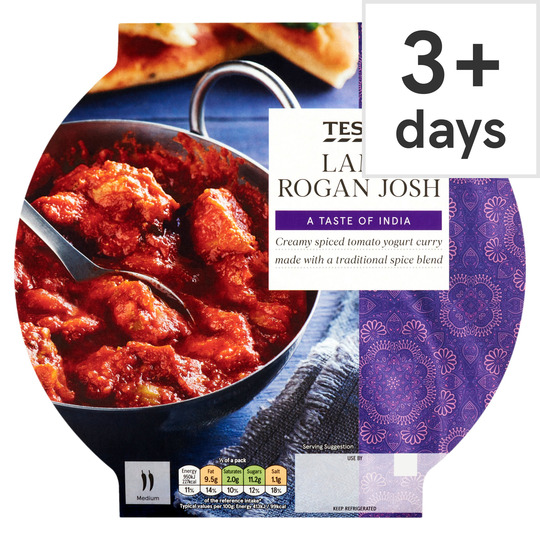 Once defrosted, do not refreeze. Suitable for home freezing. Ideally freeze as soon as possible after purchase but always by 'use by' date shown. Keep refrigerated.

Instructions: Chilled: 190°C/Fan 170°C/Gas 5 30-35 mins Place on a baking tray in the centre of a pre-heated oven, stirring halfway through heating from frozen. Stir well before serving.

Instructions: Frozen: 190°C/Fan 170°C/Gas 5 50-55 mins Place on a baking tray in the centre of a pre-heated oven, stirring halfway through heating from frozen. Stir well before serving.

Made using lamb from New Zealand

TL;DR - I'd suggest making your own, e.g. with jar of sauce, with decent meat. Good sauce but the meat was atrocious (spongey and fatty) - and not much of it (sounds like the famous Jewish joke about terrible restaurant meal - "... and such small portions!"). Sometimes people don't have this problem, so maybe it's a reliability issue at the supplier end.

Well I don't know if I was lucky, or some others were unlucky, but I had already ordered this before seeing the reviews. Glad as I wouldn't have ordered it if I had. Mine was full of very tender tasty lamb. No gristle at all in mine and the portion was large. The only reason I didn't give 5 stars was that I found the sauce a little on the bland side - I like mine quite spicy, but it was a good well made sauce just not as hot and spicy as I would like and am used to eating. I never eat ready meals but had a busy few days at work so bought for convenience. I added a little salt and extra chilli and really enjoyed it.

A piece of fat

Piece of fat and sauce for the bin

A good quality dish. Went well with Basmati rice and plum and apple chutney. Will look for this one again.

This was quite frankly one of the worst supermarket curries I've ever bought. The meat was very scarce and what was provided was fatty and almost inedible, the sauce acrid and also running in fat. As far from authentic as you could probably get, will definitely not be buying again.

The tastiest shop curry i have had for ages

Looking at the previous reviews it might be that i got lucky with this one but this is the nicest curry i have had from a supermarket in a long time. I dont normally write reviews but as i made a point of coming back to my previous basket to bulk buy a load more of these im gutted to see this item is no longer availabel, hopefully its only a short term supply problem as i was planning on buying a load of these for the freezer.

Normally buy Finest but got this for a change. Horrible mush that tasted awful

Not a good one for me. Very few pieces of lamb as for the most part it was gristle. Sauce was very nice, shame about the lack of meat .

I bought this as part of the Indian Meal Deal toge

I bought this as part of the Indian Meal Deal together with the Chicken Tikka Masala which was delicious. Unfortunately the lamb in the Lamb Rogan Josh was stringy and I even had a piece of gristle in the meat. Won't be buying this again.