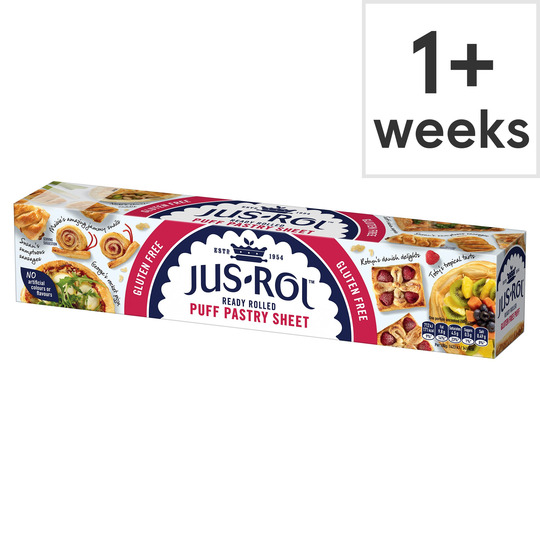 14%of the reference intake
Saturates
4.5g

23%of the reference intake
Sugars
0.5g

of the reference intake*
Typical values per 100g: Energy 1423 kJ

Keep refrigerated below 5ºCNot suitable for freezing. For Use By: See Front of Pack.

Ised for making sausage rolls for christmas. Won't buy this year. Doesn't puff, is hard and tasteless. 2 stars for the fact you are stocking gluten free pastry Tesco but could we have something edible please?

Decent quality, I prefer frozen but cant get any. Although this says on the pack not suitable for freezing, as any Celiac will tell you, you have to be inventive, so I freeze on the day the Tesco order arrives and I never leave in freezer for more than 28 days (or so...) It feels a bit more fragile having been frozen but as pastry is such a treat for Celiac sufferers I'd never complain.

You wouldn’t know the difference.

Excellent Puffs beautifully. I use the sheet like a pizza base for savoury and heap fruit in centre and pull up edges for sweet. Great gluten free alternative.

Recently gone gluten free and really missed sausage rolls. Used this on 3-4 times and on all occasions the pastry just doesn't puff up...it remains flat and stiff. It's bearable but only just due to the fact that normal sausage rolls are off limits now

I don't know why others have marked this down I think it's delicious. Although still a meat eater I like to add Tesco Herby Bangers (vegan) for sausage rolls. You can't really tell the difference when cooked and at a party, people were preferring mine to the meat ones. I also like to make cheese straws with it or cauliflower hash brown parcels.

This is a game changer! It has made life so much better for my husband. It holds together so pies and pasties don't fall apart, tastes like pastry and is versatile. Doesn't puff up to much but enough for it to be light & fluffy, making it great for lunchbox pasties and sausage rolls as it's not messy. It also stays nice when reheated in a microwave, doesn't go soggy or chewy. I'm just sorry I didn't try it sooner. No more ready made gluten free pies from now on. Now just waiting for the gluten free sliced bread mix!

Pastry it might try to be, puff it does not. Shocking stuff. Doesn't even deserve 1 star, Don't buy, just crumble some gluten free crackers on your dish and it would be better.

Awful. No puff. No taste.

Awful. Disappointing. Won’t be buying again. Bought as the only available GF variety of pastry. Followed cooking instructions to the letter. Did not puff at all. Cut a square off and placed on top of a chicken pie, did not fiddle/prod/poke at all. It stayed flat like a piece of cardboard and had no flavour whatsoever. Second attempt 2 days later with spinach and ricotta; I cut and twisted the pastry, again no puff at all and no flavour. Failed on all levels. I can only think that the recipe has changed since the positive reviews were left.

Sorry to say this pastry was awful. I wouldn't buy it again. It didn't puff up - just stayed flat and thin. I followed the instructions to the letter, but it just went incredibly hard, despite only being a light golden colour. It also didn't stick to the sausage meat, so the sausage, which had turned grey, just slithered out and looked wet and unappetising. I used really expensive sausages to stop them from being revolting, but it didn't save them unfortunately. The taste was not like puff pastry either. Rather baffled by the good reviews, because my husband (who eats anything and everything!) just about ate one, then refused to eat any more. Both children left theirs and my son actually gagged.

Don’t bother with this pastry

Sadly really horrible pastry. Found it greasy, oozed out a lot of oil, didn’t puff at all and stayed flat.