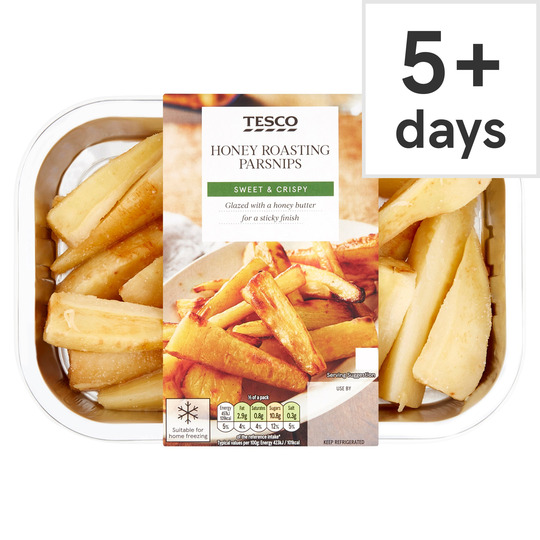 4%of the reference intake
Saturates
0.8g

4%of the reference intake
Sugars
10.8g

Instructions: 190°C/Fan 170°C/Gas 5 25-30 mins Tip parsnips and butter pat on a baking tray and place in the centre of a pre-heated oven for 10 minutes. Stir in butter and heat for a further 15-20 minutes turning halfway through. Leave to stand for 2 minutes after heating.

Instructions: 190°C/Fan 170°C/Gas 5 45-50 mins Tip parsnips and butter pat on a baking tray and place in the centre of a pre-heated oven for 10 minutes. Stir in butter and heat for a further 25-30 minutes turning halfway through. Leave to stand for 2 minutes after heating.

These parsnips looked good, they had real shelf appeal, most of us love a nice soft, tasty parsnip , that is why I bought them. They also tasted fine. Good flavour. But when it came to eating them, you could hardly bite into them they were so hard and inedible; even though they were cooked for the correct amout of time as stated on the cardboard sleeve, they were awful. So buyer beware! not everything that looks ok is ok. Don't buy these parsnips! Buy fresh and prepare and par-boil your own, also works out much cheaper.

Looked ok in the tin but tasted dreadful. Mostly went in the bin. Cooked for the stated time and temperature but still not edible. Cooked for another 15 minutes and not edible. Only the small ones were edible. Larger ones were very hard and not right. I have no idea why they don’t cook.

I hate parsnips but my family who I cook for said that these were delicious and cooked to perfection.

Absolutely appalling product. Huge pieces of largely unpeeled parsnip, not even parboiled, totally raw, with a small knob of butter. I had 2 packs and, having failed miserably to get the first pack to cook properly, I increased the heat by 10 degrees for the second pack, cut the parsnips into smaller pieces and added extra butter. I left them in the oven for 10 minutes longer than stated on the pack. They were STILL hard as iron and tasteless when I took them out. Will definitely not buy again.

roasted with christmas dinner,best parsnips i have

roasted with christmas dinner,best parsnips i have ever had.so tasty and sweet