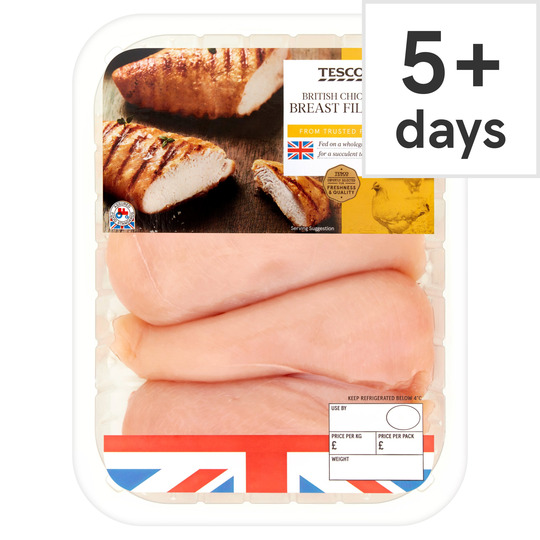 Produced in the U.K., Origin UK

Had these as part of my online shop - grateful for delivery at the moment but have ruined 4 meals with this watery, iffy chicken. Never had this before, even with my Tesco meat. Tastes bland/weird and lots of odd looking colours/ strands through it plus a total grey colour. Even the cat didn’t eat it. Rather they put the price up than sell this.

Bland, chewy, watery, rubbery and tasteless One tiny breast, one normal size and one huge one

Came online after buying chicken from Tesco for the last two weeks and complaining about how chewy and fatty it is, looking at other reviews I’m not just being fussy. Chicken is our main meat for most meals, won’t be back to Tesco until it changes, don’t know what they have done but it’s become inedible.

One of the main reasons we didn’t shop at Tesco the week before, this chicken is awful. It is full of fat and tastes like it’s been pumped full of water. I’m so sick of moaning every week and still buying it. Well enough is enough, I won’t be doing it again! Never used to be like this, but had to come and write a review as it has got so bad!

Always tastes fine, but on recent orders im finding that I'm cutting off quite a lot of the meat due to fat running through the chicken.

Anywhere from "just about OK" to "truely inedible"

While these are cheap, the quality is variable - anywhere from "just about OK" to "truely inedible". At best, they have obviously been injected with a far bit of water, as a lot is released during cooking, and they shrink considerably. At worst, they are striated with weird lines of fat (makes you wonder what on earth they do to the poor chickens!), and have a *horrible* "crunchy" texture - vile!

Simply disgusting. These breasts are just full of water. I cooked them in a frying pan without lid and I had to toss out water several time as that was preventing the chicken from cooking. I also baked them in the over for over 30 mins and the breasts were wet and uncooked through. I would not buy them ever again. I want a refund.

It was ok tasted average

It was ok tasted average