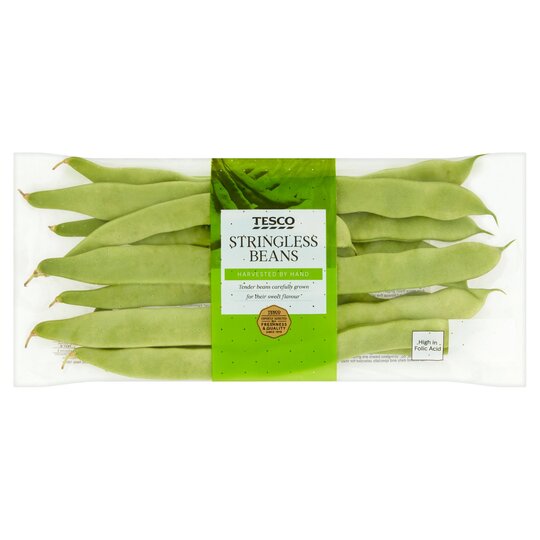 It’s ok, but Tesco seems not to know it’s origin

These beans are quite nice. I’m sure they’d taste nicer if they were grown in Uk! Under Produce of, it says Produce of!!! Can you tell me where in the world is “Produce of”

A delicious fresh taste of summer

I love runner beans and these are superb. I bought a pack 2weeks ago and they’ve been in my fridge waiting... I cooked them this evening, they were as fresh as when I bought them. I could eat a plate of these on their own! Delicious and no waste.

whyu no use by or sell by dates?

this product carries neither a sell by date nor a use by date! When wantibng to cokk this particular bags content the beans were absolutely withered and unusable. Only good for the compostbin. Why is there no dates on this product? I have never had this lack of quality before, so the rating today is not a sign of general quality.

I bought these last week and they were inedible They were old and tough and had brown patches on them. They had to be thrown away

Disappointed with the quality not fresh

Disappointed with the quality not fresh

Shockingly bad quality, fit only for the compost bin. Should never have been picked. Thick, stringy beans dotted with dark brown marks. Huge pods that meant these were way too old. Didn't realise till they were out of the bag. Don't waste your money.

Be careful when choosing them.

I normally love these beans. Twice recently I have had them delivered because we are shielding. The first time they were delivered they were inedible as they we're covered in brown spots and were soggy. I phoned Tesco to complain and received a refund. Today the ones I received are just about usable although they do have some spots on them. I will have to eat them tonight as they will not keep. So disappointing. If I had been in the store I would have taken care in choosing them.

why is Tesco fresh produce going down hill. Slowly but surely these beans have got worse. Now they are not even entirely stringless. My last packs have been iffy to say the least. a couple of big stringy beans amongst the rest that are often blemished. I feel this is done on purpose because once of twice yes but now ongoing. Once upon a times they were very acceptable. Also I do feel some packers just do not care what they throw into the baskets. Others do a splendid job.

I found these beans had a beautiful taste I have p

These have no flavour at all. To me it's a has-bean. One star for being a runner bean, and one star for being pretty and green. Never were going to compare with ones grown in own garden, but in the name of God they should have tasted of SOMETHING...