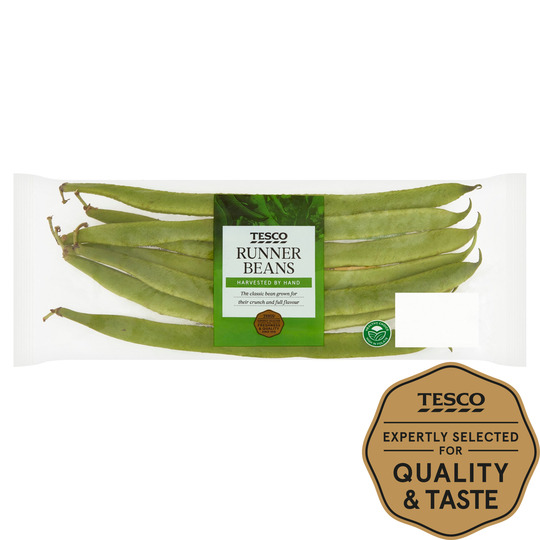 1%of the reference intake
Saturates
<0.1g

<1%of the reference intake
Sugars
1.8g

Too soft, don’t slice will not buy again

Too soft, don’t slice will not buy again

These beans are British grown,but are a waste of money,I cooked 3 and they are too large ,woody and stringy, threw the rest away.

These were at least British but out of eight in the pack two were overgrown and woody and two were very small and thin. Impossible to cook varying thicknesses all together. Very disappointing.

These beans are not up to standard at all. They ar

These beans are not up to standard at all. They are tough and woody and every single bean is badly blemished making them look very unappetising. I have bought them a few times hoping that it is just a blip….but it’s not. Tesco…..you can do better. Stop selling these or change your supplier. Buy British runner beans….we grow them here.

At least one in every pack is woody and won't pass through the slicer. They are a lot larger than you would pick them if you grew your own.

Only 5 beans in the packet. Which was actually more than enough as they were all stringy and tasteless and didnt get eaten. Very disappointedNot goo

Bought some instore, nasty. Why are Tesco not sell

Bought some instore, nasty. Why are Tesco not selling British ones, which are now in season

Poor quality for the price. I only had 8 beans in the pack, one of which was mouldy and had to be thrown away. Your competitors are better quality and cheaper. Don't waste your money on these.

Old, stringy, and inedible after 25 minutes in the steamer, and complete waste of money. Won't order these again. Think if I had been in the store I would not have bought them in the first place, they looked old when delivered, but still in date.