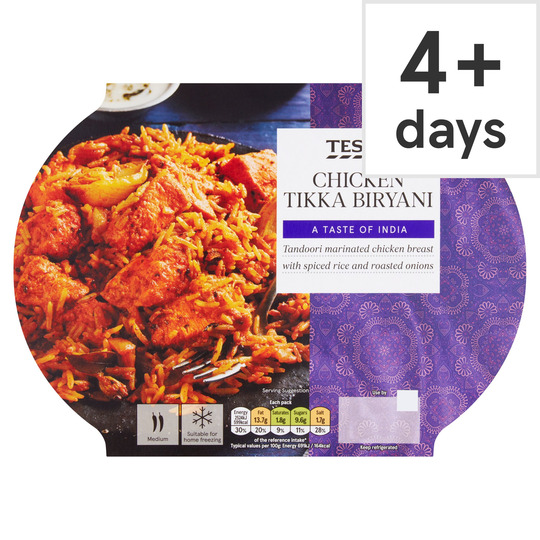 Suitable for home freezing. Ideally freeze as soon as possible after purchase but always by 'use by' date shown. Once defrosted use on the same day and do not refreeze. Defrost thoroughly for a minimum of 12 hours in the fridge. Follow the preparation guidelines above. Not suitable for heating from frozen. Keep refrigerated.

Instructions: 190°C/Fan 170°C/Gas 5 20 mins. Place on a baking tray in the centre of a pre-heated oven. Leave to stand for 2 minutes after heating. Stir before serving.

Made using chicken from Thailand.

Caution: Although every care has been taken to remove bones, some may remain.Caution: This product may contain whole spices which should be removed prior to consumption.

View all Ready Meals for 1

Make sure you've got something to drink with this as it's dry as the Sahara desert, I don't know what's happening with Tesco ready meals but they've slowly been going downhill, have had better microwave meals from budget supermarkets, Tesco seriously need to up their game

Remove it from shelf

This meal was very poor quality compared to the other ready meals on your shelf. Chicken was tough. The rest was just bland with very little taste. After eating less than half I'm afraid it was a bucket job.

Even my cooking isn't this bad. At least I make a

Even my cooking isn't this bad. At least I make a sauce to go with my curry meals. This was so awful that even the dog turned its nose up at it, and we don't even have a dog. The rice was grey, for starters. We didn't finish it. The cardboard was stiff and pink. At least, I think it was cardboard although the packet said chicken. There must have been a mix-up in the kitchen and we got the rubbish destined for the bin. Just as well I wasn't hungry or I would have eaten the plastic tray in preference.

This is not a biryani, it was totally disgusting

Delicious! I'm a curry fan and cannot see anything wrong with this meal...except maybe more onion. Tasty and fragrant rice. Chicken nice and tender. Not sure how others rate this so low. Maybe cooked too long. Love all Tesco curries x

This was the worst chicken tikka biryani I had abo

Bland. Vile chicken pieces, chewy, gristly. One chunk was edible in the whole meal. Just horrible, so glad I bought the Bombay potatoes to go along side it… even tho they wasn’t great either (tomatoey potato) at least it gave a bit of flavour to the rice. Up your game Tesco, there’s way too much competition out there to be messing about with poor quality producers

Yuk!! Chicken was a cross between cardboard and cement and the onion pieces were much too large.

Glad I only bought one rather than take the offer

I was seriously underwhelmed with this ready meal. A decent enough amount of chicken but the rice was gloopy and the whole thing was pretty tasteless overall (apart from the salt.... way too much). I've had much nicer ones from your competitors I'm afraid Tesco.