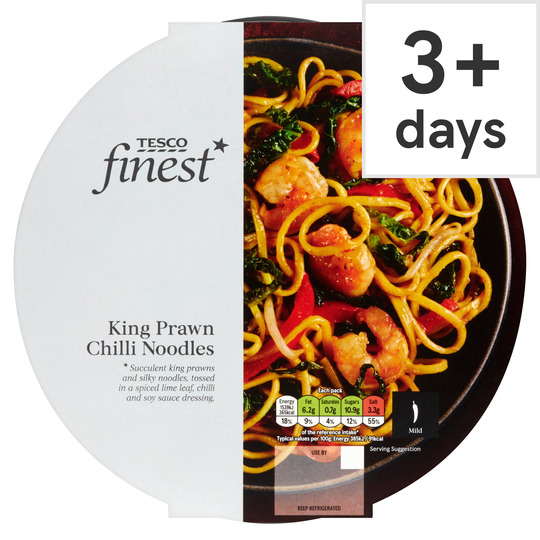 Suitable for home freezing. Ideally freeze as soon as possible after purchase but always by 'use by' date shown. Follow the preparation guidelines above. Once defrosted, do not refreeze. Defrost thoroughly for a minimum of 12 hours in the fridge. Keep refrigerated.

As others have suggested the cooking instructions

As others have suggested the cooking instructions seem incorrect, I microwaved for 4 mins, after which it looked done to me, couldn’t peel the packaging and ended up just vigorously shaking instead before microwaving for 2 more mins then had to cut the top out to open the package, I would get this again however because the noodles were amazing and soft and the sauce was gorgeous, I had a total of 3 (tiny) prawns in mine, not king prawns at all, I would cook it on the hob next time and add my own king prawns and maybe some more veg to make it a bit more interesting.

Never cook prawns in the microwave!! I've learnt my lesson now. Rubbery and tough. Too many noodles. Prawns are just decoration on top

would not buy again

Bought this as a quick mid-week dinner option. But way too sweet for our taste. And microwaving the prawns for 5 mins made them tough, not succulent.

Who ever passed this meal need to get there taste buds checked , there is no taste of chilli or soy sauce & it was so bland plus it was not cheap & no i did not eat it except the prawns ,shame on tesco for putting this on there shelf

A no go in future for me

I wasn't impressed with the dish, especially considering the price. It said King Prawn Noodle on the package, however, it was more Noodle than King Prawn. I had just three prawns in the dish, which isn't great. I wanted to try it because it looked tasty from the photo online - never again. Avoid it unless you're on the lookout for a dish without prawns.

Absolutely fowl flavour,tasted like something crawled in and died

Small portion in a big package. Prawns were tough, sauce was watery, dominant chilli flavour, but otherwise meh. Will not buy again.

I don't think I would consider this one of Tesco's 'Finest' meals. Was looking forward to trying this and it was more like noodle soup. The sauce was too much and not even very tasteful, and after eating the 5 prawns and a few mouthfuls of the noodles, I had to throw it into the waste and make a sandwich! Sorry Tesco but I would reconsider this recipe.

Very disappointed. Nice flavour, but way too much sauce, not enough veg. When cooked, it resembled a Pot Noodle rather than a Finest meal. Won't be buying this again.