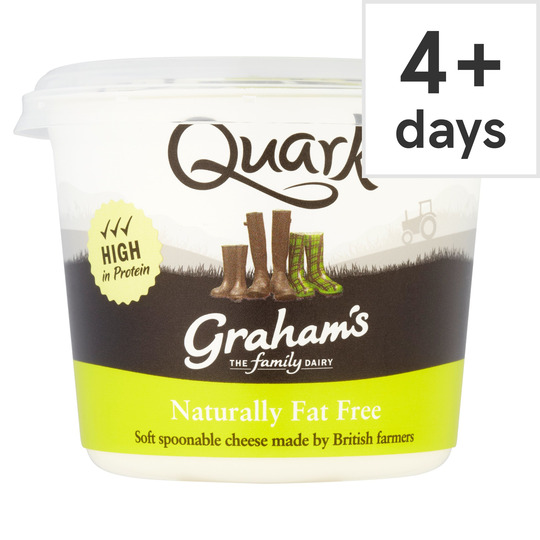 Consume within 3 days of opening.Keep refrigerated below 5°C. Do not freeze. Use by: See base of pot.

Horrible texture and taste, two tubs I have bought

Horrible texture and taste, two tubs I have bought are very runny, and lumpy looks like curdled milk and tastes like it, bring back tesco quark

I was relieved this was as good as the previous Tesco Quark, but i really want to buy a 500g pot. I have this every day as part of my Slimming World food plan for my desserts and mix it with natvia sweetner and various low fat/calorie drinking chocolate sachets. But now i have to buy 4-6 tubs a week (to ensure i always have a good supply of it in my fridge) rather than 3 x 500g - so what's happening? Will the Tesco 500g one come back or can Graham's farm do 500g tubs? ASAP please

I recently bought 4 tubs of this Quark and when I opened the first one I found it had a very off-putting smell, which was very similar to sour milk, and had the same taste too! The Use by date was 18th Feb, and as it is only the 4th Feb, I immediately opened the other 3 and they were all the same! I have used other Quarks for a long while now, and never had this issue before, but this was this first time I have tried this one - and it will certainly be the last time too!

I was very pleased to see that Quark was now avai

I was very pleased to see that Quark was now available at last, and from Scotland too, instead of France. Let's hope it will be Tesco's policy to buy British if at all possible. Fewer food miles and helping British farmers too. A no brainer!

I love it, good consistancy very smooth and versat

I love it, good consistancy very smooth and versatile - I would highly reccomend it.

Ok, but odd bits in it

It's same As any other quark, no taste until you add things too it. But twice now in different pots I have found odd lumps in it, but off putting to be honest. This is the only one available to buy as they seem to have taken the other Tesco quark away ..