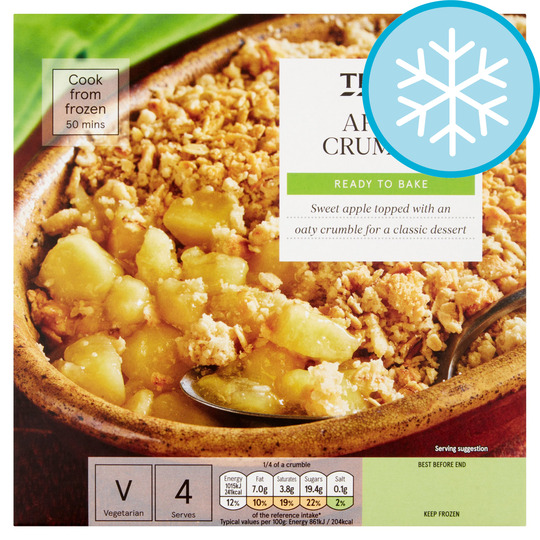 Had to phone Tesco and ask for refund under quality guarantee as it was so poor. Crumble was not proper crumble and had the texture of oats and tasted like sawdust. It did not go brown in the oven and took forever to cook from from frozen. Fell to pieces as spooned out of the foil tin. Only a few pieces of apple that were discoloured and so much syrup that we felt sick. No-one could eat more than a few mouthfuls.

Mainly crumble and not much apple. The crumble tastes like breakfast cereal. Had one portion and threw the rest in the bin.

I was so looking forward to this as it was my treat for the week, the best part about it was the Devonshire custard on top, tasteless & bland, thought I was eating custard on top of porridge, terrible

Good, but too sweet.

I would rather have the option to add more sugar if individual taste required it.

After heating, i served this with double cream, th

After heating, i served this with double cream, the oaty crumble turned into a porridge consistency which i hated!

This is a very nice apple crumble. Nice and crispy

This is a very nice apple crumble. Nice and crispy topping .I wouldn't buy any other its this one or home made.

This Apple crumble ( frozen) was absolutely smashing will buy it again.