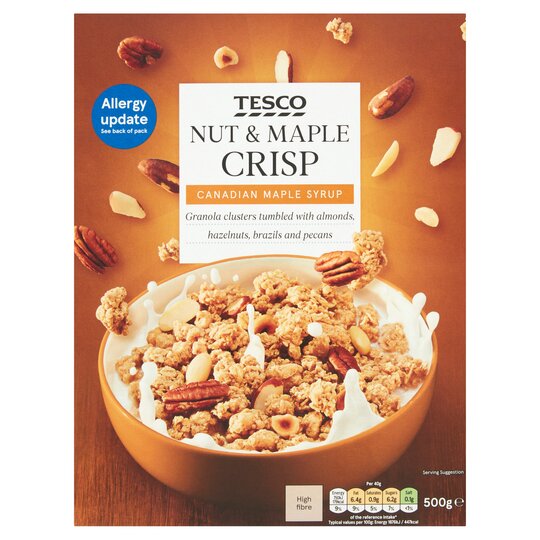 Warning: Not suitable for small children who can choke on nuts/seeds.Caution: This product may occasionally contain small fragments of shell..

This is rubbish bring back Four Nut & Maple Crisp

This replacing the excellent Tesco four nut & maple crisp cereal. Lucky to find a nut per serving and it has nasty tasting fake maple flavour. Price the same as the more nutty cereal but worse than the cheapest own brand on the Market. When will Tesco realise that people are willing to pay more for a superior product and nothing for cheap nasty tasting cereal. This replacement is NASTY.

I think the recipe must have changed. As soon as t

I think the recipe must have changed. As soon as the cereal touches some milk it's very much not crisp. The flavour isn't great either

This is nice, it is tasty and filling and doesn't go soggy but it doesn't have nearly enough nuts. An average (40g) bowl has 2 pieces of nut, each of which is a quarter of a pecan or similar size piece of other nut!

Love it because it crispy and needs hardly any milk, I add extra nuts, good filling dish full

Why mess with a good recipe?

Tesco have changed the recipe and added what looks like tiny pieces of extra sweet corn flakes. I bought Maple & Pecan crisp because it was not as sweet as some other cereals, won't be buying any more :(

Tastes and filling all morning.

It's so much nicer than I thought it would be. There are nice big bits of nuts, and the crisps easily chewed and don't destroy the inside of you mouth.

I bought originally a few months ago as I do not like soggy cereal, tried so mnt this is the best, lovely and crunchy