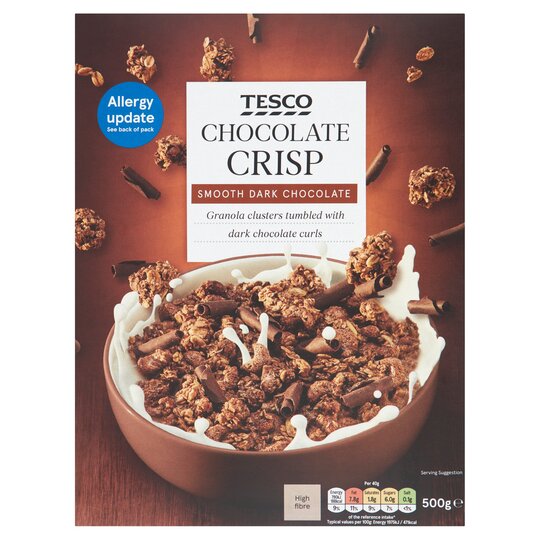 The recipe for this has changed and its now a different cereal despite no change to packaging. As previous reviews say the old version was great, so I was very disappointed when I opened a new box and found it different. Looking at ingredients, the 'crisps' are now made of rice flour instead of barley, they have added wheat flakes, vanilla and coconut and removed barley flakes, honey, dried milk, chocolate powder and a few others. Palm oil has been switched to rapeseed oil which is probably the only good thing. No longer says produced in Belgium so I guess they've moved to cheaper production. Not nearly as nice to eat as both texture and flavour are worse, maybe I'll come round to it but otherwise I'm pretty sad my favourite cereal is gone :(

My daughter loved this cereal until she started a

My daughter loved this cereal until she started a new packet today, apparently it's changed, it's not as nice and sweeter than before, at least it might stop her getting 3 packets a week.

This is the best cereal and it hasn't been availab

This is the best cereal and it hasn't been available for 3 weeks, I cannot find another to replace it with. I hope it comes back

The tastiest cereal out there! A favourite of my h

The tastiest cereal out there! A favourite of my husband and I.

I love this cereal - as an adult-child who can't let go of their sugary treats, this is the perfect snack for someone who wants to cut down on sweets and crisps. Two things for Tesco: Can you get a substitute for Palm Oil, maybe coconut oil? The change in packaging is a lot more off-putting. Change it back

I started buying this cereal about 6 months ago & I absolutely love this !! It’s deliciously chocolaty. What a way to either start the day or end it!!