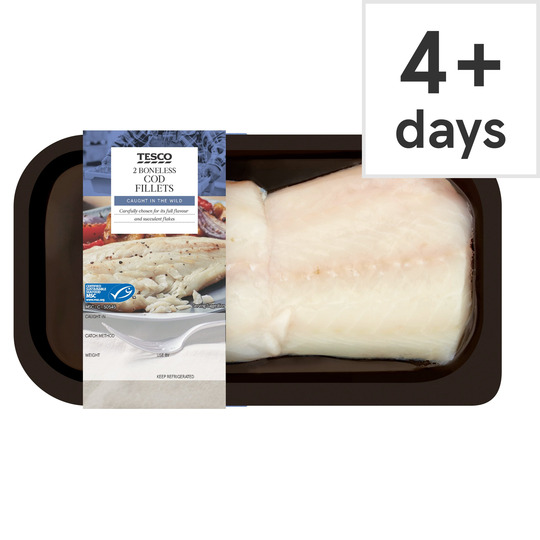 Suitable for home freezing. Ideally freeze as soon as possible after purchase but always by 'use by' date shown. Defrost thoroughly for a minimum of 10 hours in the refrigerator. Once defrosted use on the same day and do not refreeze. Follow the preparation guidelines above. Not suitable for cooking from frozen Keep refrigerated. Once opened, use immediately. This product was previously frozen and has been restored to chill temperature under carefully controlled conditions. It is still suitable for home freezing.

Instructions: 18-20 mins 180°C / Fan 150°C / Gas 4 Loosely wrap each fillet in lightly oiled foil to form individual parcels. Place on a baking tray in the centre of a pre-heated oven.

Packed in the U.K.
Made using cod caught in the North East Atlantic using Trawls, Hooks and lines, Seines, Gillnets and similar nets (the main fishing area is detailed on the front of pack, due to fishing method some fish may have been caught in adjacent fishing areas)

Caution: Although every care has been taken to remove bones, some may remain.Caution: Take care when opening parcel as steam may escape.

Just no. I had this twice and the first time I got a really poor quality tail and the second there were huge bones throughout it. On top of this, it’s really expensive for what you get. For the same price, you could get some great quality chicken that’s actually edible. Please don’t buy this

Excellent tasty fish - much better value than cod loin - no doubt comes from the same fish as the loins and is probably tastier because the skin is left on. I place it on an oiled baking tray, spread a little mayonnaise on the top of the fillets and then sprinkle over a crumb mixture - of bread/almonds/cheddar (blitzed in the blender). Place some cherry tomatoes on the tray and put in a pre-heated oven 200C for about 9 minutes. Serve with plenty of green veg. Absolutely delicious - moist fish , crisp topping.

Paid extra for these fillets as advertised as BONELESS but I found large bones in. Had to use pliers to get some bones out but still some left in that I could not reach. My other half cannot eat any fish with a hint of a bone so probably going to go to waste. Tesco - please check this in future as a waste of money otherwise.

This looks good in the picture but when you open it up you’ll probably find you’ve got a folded 4-5 inch tail on each portion with no fish on it at all! Which no doubt makes up the weight snd money! I’ve had these twice now but never again! Very disappointed with you Tesco!

These cod fillets are very thin - the tail end of

These cod fillets are very thin - the tail end of the fish and mostly skin - and are not worth the money. Next time I click and collect I will check them carefully and if they do this again, I will send them back. Haven't tasted them yet so cant comment. But last fresh fish, haddock I think, I bought was extremely watery. Lets hope they improve now we are out of the EU. I believe the French catch them, take them to France, pack them, then sell them back to us.

We got two tails, they were generous in length, al

We got two tails, they were generous in length, although not a lot of meat. They were boneless. Happy to see the skin on, as it was needed for the recipe.

I made this into cod bites, having first skinned it. There was one very small bone in it, which was easily found prior to cooking. Fried up beautifully in home-made batter. Was complimented on a fantastic dish, which I served with baked new potatoes and veggie medley, comprising of baby sweetcorn, courgette, mushrooms, radishes, spring onions, red and yellow pepper, and garlic, cooked in butter, with a shake of paprika, dill, salt and pepper I hope my next pack will be as good as the first

Definitely not boneless! I know they say some bone

Definitely not boneless! I know they say some bones may remain but I found several in both pieces of fish.