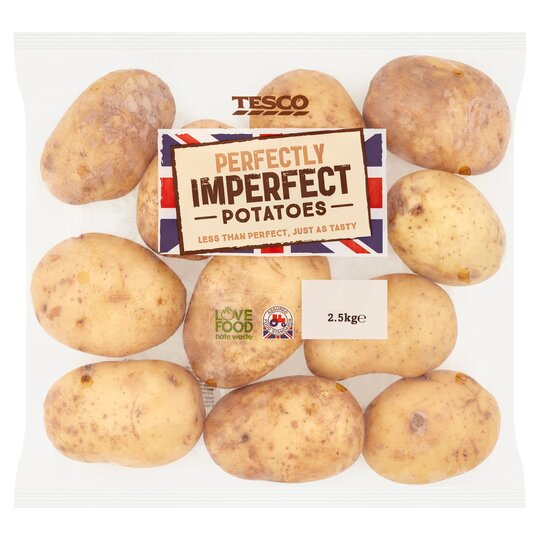 Basic spuds, not much else to say.

Very poor quality - when peeled, full of black bruises, and mould - once all the damage and mould was cut off, there wasn't very much potato left. I wouldn't bother with these again

first purchases of these were excellent value,but now the quality of these potatoes are awful ,some potatoes are black inside.scaby on the outside.years ago these would have been fed to pigs by farmers,,,,pay a few pence more and get the better quality,....

These potatoes are really a good product and more than good value for money . They made good mash and were ideal when peeled for salad potatoes cut into small cubes.

I received a bag of tiny (smaller than new potatoes), bruised/bad and sprouting potatoes. I know they are described as perfectly imperfect but I expected them to be fresh. Surely the store pickers (I had them delivered) could see the poor quality of them through the bag. They went straight in the bin. Really disappointing.

Very good for the environment.

The quality probably depends on the time of year, but I have found these potatoes very good and excellent value for money. sometimes they have begun to chit and occasionally have a slight greenness from exposure to light. But on the whole highly to be recommended, not least because of avoiding perfectly good potatoes otherwise being wasted.

Half the Potatoes were crusty and dead.

Not a bargain if half the bag is peelings.

Potatoes are potatoes, right? Well, you'd be wrong. These potatoes are tiny. Literally the size of snooker balls or smaller. And three quarters of them were green. And by the time you've peeled them, they're the size of golf balls. Because they're so tiny and there's so much peel relative to actual potato, you need to use three quarters of the bag just to get enough edible potato out of them to feed three people. Complete waste of money and time.

You have indeed achieved the description attributed to these potatoes. After having peeled them, there is still an enormous amount still to be cut away on each potato. In that sense, they are totally imperfect - and you have managed to achieve it "Perfectly" with each potato. Dreadful standard and value for money.

When I started to first buy these I was impressed nice large potatoes which I cooked and made lovely mash with,however this week I ordered as I wanted to make mash to freeze for later use as I live alone, I thought the other reviewers had slightly exaggerated how small the potatoes were. I apologise now as I couldn't believe how tiny they were, as I tried to peel them they kept slipping from my hand and I became really frustrated as many were already starting to turn green and were quite soft. I will not be buying these again to make my mash. More fit for salads etc.