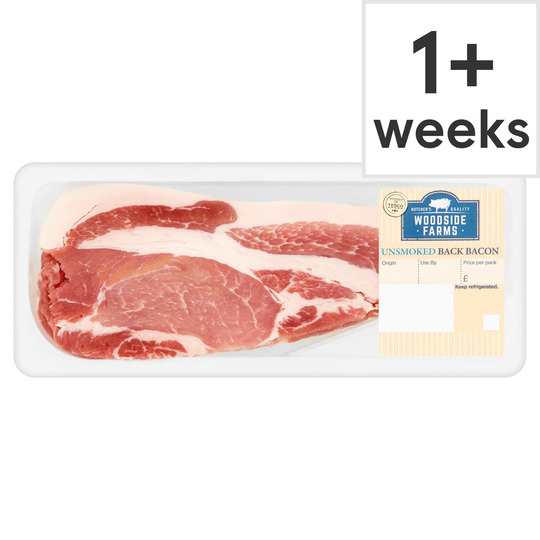 Suitable for home freezing. Ideally freeze as soon as possible after purchase but always by 'use by' date shown.Defrost thoroughly in the fridge before use. Once defrosted use on the same day. Do not refreeze. Follow the preparation guidelines above Keep refrigerated. Once opened use immediately.

Produced in the EU, using pork from the EU

Check food is piping hot throughout before serving.Packaged in a protective atmosphere.

Spend a bit extra an get the good stuff

Really poor quality. Looks like the leftover bits from the good stuff. Really fatty and pretty tasteless. I won’t be buying it again

This bacon is absolutely disgusting!!! When I opened the packet it smelt odd despite only just having been delivered. When I tried to separate the rashers it was so finely sliced that it became a mess of string which then stuck to the grill pan and burnt - or rather the meat part burnt while the fat (of which there was a lot) went a nasty shade of grey. After cooking it, I tried a little bit and it was awful - nasty taste and too salty - the whole lot went in the bin. Why are Tesco still stocking this after all the bad reviews???

should be called water with added slime, should no

should be called water with added slime, should not be sold as bacon.

Just opened this and it was blue July is not even

We used to really like this bacon but just recently it tastes and smells different. My whole family has noticed the difference. Won't buy it again!

Image is accurate on the fat ratio. Tastes ok. It's too finely sliced for me as I found it difficult to separate the slices.

This cooks up lovely and tender, not chewy, but damn is it salty!!!!! Burning my mouth salty! Glad I didn’t reach for the smoked!