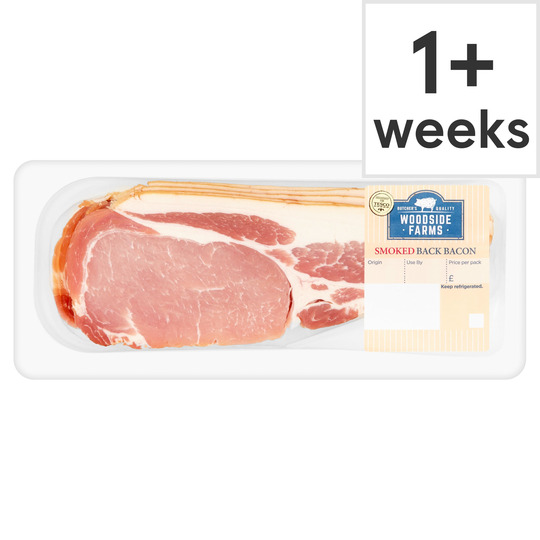 14%of the reference intake
Saturates
3.8g

28%of the reference intake

Suitable for home freezing. Ideally freeze as soon as possible after purchase but always by the 'use by' date shown. Follow the preparation guidelines above. Not suitable for cooking from frozen. Defrost thoroughly for a minimum of 8 hours in the refrigerator Once defrosted use on the same day and do not refreeze. Keep refrigerated. Once opened, consume within 3 days and by 'use by' date shown.

The tops for taste and value.

Best value full flavour rashers with each having enough fat to crisp. It's always on my list.

Not at all good

I tried this as the price of even tesco own bacon is getting extremly expensive for 10 wafer thin strips. Although the same weight of 300g this bacon seems slightly less thin, a much smokier taste and I would say slightly better quality for an afforable price.

Not nice quality at all

great price and enough in pack to use over a few days,it freezes well,shrinks a bit but provides enough tasty fat to make proper fried bread.........not every day though!

Used to be quite thick bacon but last few times i

Worst bacon I have ever had. Masses of water and salt means it takes much longer to cook and tastes horrible. Will never buy it again.

I like my back bacon to be Smoked, thinly sliced a

I like my back bacon to be Smoked, thinly sliced and Salty. This is the most perfect bacon and now that I have left this review Tesco will withdraw it from sale. Just watch!

Worst bacon I've ever had. I don't know if its was just this particular batch but it was awful. On getting it out the pack it was paper thin and fragile with a jelly like texture. It fell apart just coming out of the pack. During cooking it gave off an entire pan full of water and little white chalky bits and fell apart into even smaller pieces. The fat refused to cook and I had to pull rubbery strings of it out of my pan of bacon pieces before serving it. Tasted of salt and smoke, hardly any pork flavour and a chalky texture.

Been disappointed with this lately. It used to be ten thinner slices, now it's six thick ones. Not ideal when you have a family of 4 to feed