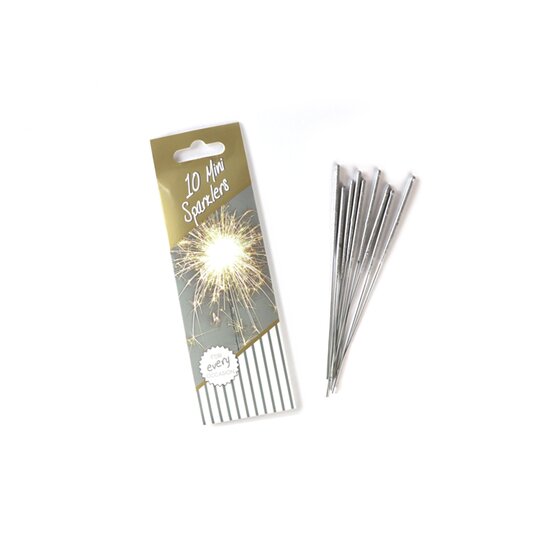 Warnings The sparkler should not be held in the hand or given to children under 5. Indoor sparklers should be used under adult supervision, and should only be sold to those over 16

Hard to light and then out in a flash

They're really slow to light and by the time you've lit the second, the first is already out.

All over in seconds

Each one lasted thirty seconds at most. After failing to get them lit one at a time, I tried lighting several at once but by the time you've stuck three in the cake, they've burned down already. Complete waste of money

Bought these for my grandson's birthday cake but quite honestly they were awful. I was so embarrassed that I had put these on the cake. When they did eventually light they burned out really quickly without any sparkle whatsoever.

It took so long to light the sparklers that the first one had burned down before the second one was lit, similarly the second sparkler burnt out before the third one ignited. Ended up using only one sparkler on the cake instead of all 10 (Birthday Cake). I won't be buying this product again.

These are very difficult to ignite. If one person is lighting the sparklers it is impossible to light them all at once, or even more than one at once. By the time the second has lit the first has burnt out. Only any good if you want to burn them individually. Also note that these are sparklers and cannot be blown out.

Money up in smoke..!

What a waste of money! As soon as you light one, the other has gone out. I had to light 7 on the cooker and by the time i had reached the lounge the sparklers had gone out approx 5 seconds.

Not hand held so put in ground - took ages to light and some didn’t light with a cooking blowtorch. Very disappointing New Year sparklers.